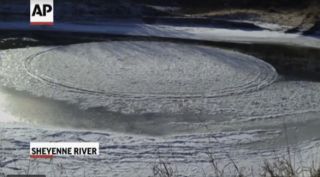 An ice circle spotted on the Sheyenne River in North Dakota.
(Image: © AP)

A spinning ice disk spotted on the Sheyenne River in North Dakota is a totally natural phenomenon and not the work of aliens or secret government spies, according to reports.

Retired engineer George Loegering saw the giant frozen circle on Saturday (Nov. 23) while on a hunting trip with relatives, the Associated Press reported. About 55 feet (17 meters) around, the icy disk was spinning in the river current like a record on a turntable.

By Tuesday, the twirling had ground to halt but the circular shape of the disk was still visible in the river, Loegering said. "I'm not sure how long it was there (spinning)," he told the AP. "It had to be quite a long time. If you look at the picture, you can see growth rings on the disk."