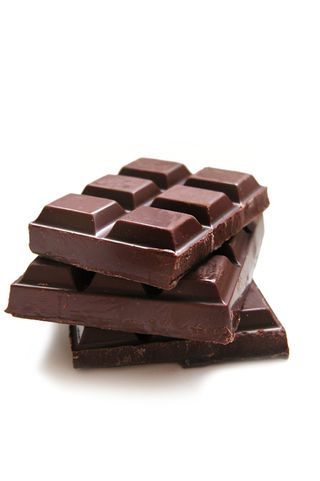 Chocolate is not widely consumed in the tropics, even though that's where most of the world's cocoa is produced.

The reason: It's too hot.

High temperatures in countries like Nigeria reduce chocolate into a sticky, gooey mess.

Food scientists have been trying to remedy this situation for decades, and now researchers in Nigeria believe they are close to achieving the holy grail among chocolate manufacturers: a heat-resistant chocolate that actually tastes like chocolate.

Most brands of chocolate melt at temperatures between 77 to about 91 degrees Fahrenheit.

S.O. Ogunwolu and C.O. Jayeola, food scientists at the Cocoa Research Institute of Nigeria, have mixed cornstarch with cocoa to produce a heat-resistant chocolate that they say compares "favorably with conventional milk chocolate in terms of color, taste, smoothness and overall acceptability."

The starch acts as a chocolate thickener and prevents the outflow of cocoa butter—the natural fat of the cocoa bean—when the heat is on. The researchers found that using 10 percent starch was ideal and produced a product that was comparable to milk chocolate in taste tests.

The new concoction stays firm up to 122 degrees.

The recipe is outlined in the current issue of the British Food Journal.

The battle to prevent chocolate meltdown has been a long one.

One of the earliest of these culinary offensives occurred in the midst of World War II, when the U.S. Army commissioned research into the creation of a chocolate that soldiers could eat on the go. The bar wasn't set very high, though, and the army captain who oversaw the project had only four requirements for the military chocolate: that it weigh only about four ounces, be able to withstand high temperatures, have high food energy and taste "just a little better than a boiled potato."

Since the 1970's, there have been about nine patents plus numerous research articles on the development of heat-resistant chocolate.

"People have been working on it for a long time and are still working on it now," said Richard Hartel, a food engineer at the University of Wisconsin-Madison, who was not involved in the Nigerian study.

During Operation Desert Storm, Hershey's Chocolate tested a high-temperature chocolate capable of withstanding 140-degree temperatures. It was dubbed the "Desert Bar," but troop reactions to its taste were mixed.

Hartel has not tried the new cornstarch chocolate himself, but he points out the one major problem that previous heat-resistant chocolate products have run into.

"They don't melt in your mouth," Hartel told LiveScience. "You have to chew it, and that's what leads to a waxy or chewy characteristic."

The corn starch chocolate doesn't seem to have this problem, however. In taste tests conducted by the Nigerian researchers, people rated the new chocolate as being similar to milk chocolate in color, taste, smoothness and overall acceptability. It was found to be slightly less sweet than milk chocolate, however.

The researchers hope their new confection will "allow the wide distribution, display and consumption of chocolate in the tropics, especially Nigeria."