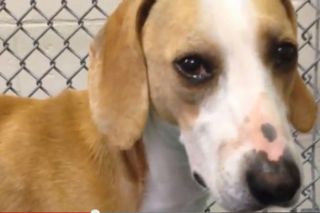 My colleagues and I have released the results of the latest HSUS undercover investigation, in this case, laboratory experiments on dogs and other animals at Georgia Regents University (GRU) in Augusta, Ga. The focus of our investigation was on the use of dogs for unnecessary — and terminal — dental experiments.

The dogs had been gathered and sold to the university by an unscrupulous random source Class B dog dealer.

The hound mixes our investigator saw in the laboratory looked strikingly similar to my dog Lily, and for that reason alone this investigation had special poignancy for me. The dogs there seemed so vulnerable and afraid, and it is a horrifying thought to imagine Lily in the hands of someone with the worst of intentions for her.

Our HSUS investigator spent three months at GRU taking care of dogs who underwent painful dental surgery. The dogs were acquired from Kenneth Schroeder — a random source Class B dealer who has been formally charged by the U.S. Department of Agriculture (USDA) for violations of the Animal Welfare Act, including obtaining multiple dogs from illegal sources. [ Nearly 100 Animals Rescued from Squalor at Rural Homestead (Op-Ed ) ]

The investigator developed a very special bond with one of the dogs who was malnourished and scared of men. The investigator named him "Shy Guy." Shy Guy and five other dogs had their teeth pulled out and had dental implants put in place. Shy Guy, who stopped breathing on the surgical table during the removal of his teeth, survived only to be killed eight weeks later, along with the five other dogs. It is appalling to see that the dogs died just for a small piece of their jaw bone.

You can see Shy Guy and the other victims in this video, narrated by actor and Georgia native Kim Basinger.

We know that those six dogs were not the first victims of unnecessary dental-implant research. Georgia Regents University has been conducting similar experiments on Class B random source dogs for years. Between 2005 and 2012, 186 dogs were purchased by GRU, with many of them likely suffering the same fate as Shy Guy. All 186 dogs were acquired from Kenneth Schroeder.

Documents regarding one of those studies refer to the upcoming expiration of GRU's patent on a previously-developed dental implant product and states that "competing technologies are being developed," suggesting that the research was conducted to try to give the company a leg up in the tooth-implant world.

A critic of those experiments, Dr. James Jensvold, D.D.S., noted that the products at issue in that lab already had U.S. Food and Drug Administration approval. Jensvold told The HSUS that when he was a dental student and maxillofacial surgery resident, he had "witnessed laboratory animals being treated little different than a test tube, which is inconsistent with the values of compassionate health care." (Urge the USDA to crack down on Class B dealers.)

The HSUS has filed complaints with the USDA and the National Institutes of Health's Office of Laboratory Animal Welfare, calling on the agencies to investigate these issues and others observed during the investigation. We are also calling on Georgia Regents to stop getting dogs from any random-source Class B dealers and to end dental experiments using animals. [ When Animals Suffer, the Country Pays a Price (Op-Ed ) ]

There are still six random source Class B dealers operating in the United States. They are allowed to gather dogs and cats from various sources, including auctions, "free to good home" ads, online sources, flea markets and even from some animal control or other shelter facilities — then they resell them to research facilities. There have been cases of stolen pets ending up in research laboratories due to these Class B dealers and their lack of morality and ethics. "Shy Guy" and the 185 other dogs that GRU acquired could have been pets, just like Lily.

Pacelle's most recent Op-Ed was "The World's Most Dangerous Band Promotes Shelter Pets." This article was adapted from "HSUS Undercover: Georgia Dog Lab Supplied by Random Source Dealer," which first appeared on the HSUS blog A Humane Nation. The views expressed are those of the author and do not necessarily reflect the views of the publisher. This version of the article was originally published on LiveScience.