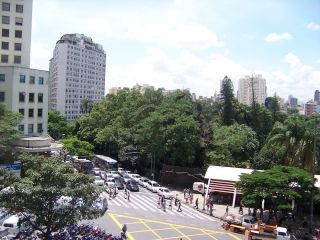 Chris Busch is director of research and Hallie Kennan is a research assistant at Energy Innovation: Policy and Technology. They contributed this article to LiveScience's Expert Voices: Op-Ed & Insights.

Because urban centers can be a leading source for greenhouse-gas emissions, low-carbon urban design can be a crucial tool for combatting rising emissions levels.

Well-designed cities cut greenhouse gas emissions in three ways: They get people out of cars by enabling walking, biking and public transit; they lower building energy-use per person; and compared to other patterns of human habitation, densely-populated cities reduce the amount of land used per person, thus conserving forestland and other green spaces that store carbon.

Building-related emissions are typically lower on a per-person basis in dense cities because competition for space is stiffer. Greater demand means that homes and businesses tend to be smaller, which reduces heating, cooling and lighting demands per person. Incidentally, to maintain a high quality of life, densely-populated cities should provide outdoor plazas and green space to compensate for less indoor space.

Urban boundaries and compact cities reduce humanity's concrete footprint. This leaves more space for wilderness and agriculture, which absorb and store carbon in the soil or vegetation at higher amounts than do buildings or roads.

The prototypical example of this well-designed city is New York, which has per capita greenhouse gas emissions about two-thirds below the U.S. national average.

The figure above compares emissions for cities and the countries in which they are located, ordered according to national per-capita greenhouse gas emissions. It shows that urban residents often have lower emissions per person than national averages for home countries.

The role that cities can play in lowering emissions is evident in the wealthier developed countries, though the U.S. city of Denver illustrates that cities are no panacea. Denver's emissions are almost as high as the U.S. average. This is because Denver is relatively sprawling compared to New York, which has 10,350 residents per square kilometer, 6.6 times Denver's density level of 1,558 residents per square kilometer. As a result, transportation-related greenhouse gas emissions in Denver are more than four times larger than New York's.

The figure data take into account energy-related emissions for both cities and countries. The city emissions numbers take into account the direct combustion of fuels — including from small mobile sources (like cars) and industrial sources, as well as the estimated emissions associated with electricity, including local generation and imported electricity. Everything else from beyond the city's boundary, including agricultural emissions and industrial emissions, is not captured in those data. For wealthy cities like New York, these other emissions due to imported manufactured goods could be relatively large. While New York appears to have low carbon emissions based on its transportation and housing emissions per person, this issue of traded goods complicates the picture.

The World Resource Institute and partners recently released a protocol for counting city emissions. It is currently being tested and refined in 33 cities. The preliminary version did not fully grapple with incorporating agricultural and industrial emissions, but the next iteration will approximate comprehensive coverage when it is released in 2014.

Even without the additional illumination these data will provide, analysts know that well-designed cities help to lower building- and transportation-energy demands and conserve green, undeveloped land, thus reducing the carbon footprints of their residents. With urbanization taking off in China and other developing countries, now is the time to build sustainable cities.