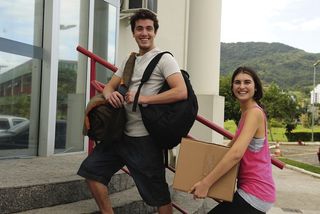 Bob Schildgen is a columnist for Sierra, the magazine of the Sierra Club, where he answers questions from the public under the alter ego Mr. Green. This question and response originally appeared in an August post to Ask Mr. Green. Schildgen contributed this article to LiveScience's Expert Voices: Op-Ed & Insights.

To misquote the immortal Johnny Cash, "Don't take your car to school son / Leave your car at home."

Abandoning your wheels is one of the greatest things you can do to shrink your collegiate environmental footprint , since burning a gallon of gas emits almost 20 pounds of carbon dioxide (CO2 ). That's 600 pounds of CO2 in just four 200-mile trips home and back.

If you must travel off campus, take the bus or train — or sign up for a car-sharing service like Zipcar, which has locations at more than 100 U.S. colleges. Most schools also have online ride-share boards.

In addition to preventing all that pollution, not having a car at school will also save you from excruciating searches for parking and keep some serious cash in your wallet: Campus parking passes can cost as much as $300 per semester, plus there's the wad you would have to spend on fuel.

Many schools make the environmental decision for you, banning vehicles for freshmen or enacting other tough vehicular restrictions. In fact, frosh aren't allowed to have cars at five of the top-10 liberal arts colleges in U.S. News & World Report's annual ranking.

If you were already planning to be car-free at school, you can ditch the popular but energy-sucking dorm-room mini-fridge. And if your campus doesn't ban cars, you could start a campaign encouraging administrators to do so, which will give your university a better shot at placing high on Sierra magazine's annual greenest (coolest) schools— which was just released last week.