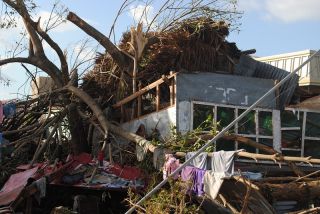 Today, people's thoughts, more than ever, extend outward. The devastation wrought by Typhoon Yolanda (Haiyan) in the Philippines, a longtime American protectorate and sovereign ally, is in the early stages of assessment, but it is massive and life-changing for perhaps millions of people and for countless animals.

Humane Society International has had staff members based in the Philippines for the past four years as part of its worldwide street dog campaign, and those members are already on the ground in the areas hardest hit, working to identify the most urgent needs of animals and building a team and a strategy — in concert with the government and with other animal welfare agencies.

Right now, HSI's experienced veterinary team is on the island of Cebu, the biggest island in the strike zone, and plans to workin close cooperation with local and federal officials to provide comprehensive aid and deliver an animal-focused response.

The HSI team already has carried out an assessment of the northeast region of Cebu and met with local representatives to offer support. Our responders also are preparing to visit two other hard-hit islands as soon as they receive the necessary clearance. They plan to work in close cooperation with local and federal officials to provide comprehensive aid. [Dogs to Prairie Dogs, Animals Need Rescue from Disaster (Op-Ed ) ]

HSI personnel are familiar with the country, they're close to its people, and they're committed to helping animals in crisis. Donate to our International Disaster Fund.

The HSUS and HSI always respond to animals in times of natural disaster. In the aftermath of previous disasters, we have offered food for animals, Rabies and other vaccinations, to avoid the spread of zoonotic disease in the area, as well as direct veterinary care, such as wound and injury treatment, and de-worming.

Of course, we also have directly rescued animals as well, mainly from flooded areas, where pets can be seen on rooftops, on the tops of cars or floating on objects in the water. During our last typhoon response in the Philippines in 2009, we did just that. In fact, our people rented a boat and went through flooded villages and neighborhoods outside Manila, rescuing and returning pets to their owners, as well as offering food for displaced pets.

The tsunami in Japan, the earthquake in Haiti, and the Katrina and Sandy emergencies in the United States come to mind when people think of Typhoon Yolanda and its scale and devastation. The HSUS and HSI will respond to this tragedy, just as we did with the others.

Of course, commemorating Veterans' Day this week, our thoughts also are with our nation's millions of service members, past and present. The HSUS has many military veterans among its supporters, and we've seen staff colleagues and family members called to active duty during the last decade, so we're always mindful of the risk and the honor that comes with military service. Both current and past members of the armed services play a role in keeping us aware of animal-related concerns on American military bases, and in foreign theaters of action. They are our allies in the army of the kind, and we are grateful for their dedication to animals in need, just as we are grateful for their tremendous devotion to the United States of America.

Animals are veterans, too. So many dogs, horses and other creatures have provided so much in the way of service to our country. And there is a special bond between our human veterans and our animal veterans. In recent years, The HSUS has supported the Veterans Dog Training Therapy Act and other measures designed to strengthen programs devoted to animal-assisted therapy for veterans, programs like the one carried out at the Warrior Canine Connection. Some of the most poignant stories I've read in recent years have focused on the bonds between service members and companion animals. Such programs bring benefits to people and to animals, and The HSUS wants to see them flourish in the years ahead.

It's no irony that some of the first responders in the Philippines will be our U.S. military service members. Today, we salute them, and we hope that responders in the Philippines can bring relief during this time of loss and remarkable disruption for so many. We also hope that the victims can draw strength from the knowledge that so many of us are thinking about them and organizing to help them in the days, weeks and months ahead.

A slideshow with images from the Yolanda response is available here.

Pacelle's most recent Op-Ed was "Hunt Club Auctions Opportunity to Kill Endangered Rhino" This article was adapted from "Typhoon Yolanda Leaves Devastation in Philippines," which first appeared on the HSUS blog A Humane Nation. The views expressed are those of the author and do not necessarily reflect the views of the publisher. This version of the article was originally published on LiveScience.