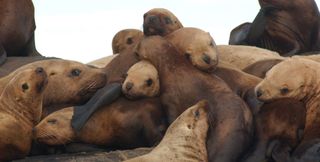 The eastern Steller sea lion, which roams the West Coast between Alaska and California, has been taken off the U.S. Endangered Species List after a major population comeback over the last several years.

The National Oceanic and Atmospheric Administration's (NOAA) Fisheries Service, which manages the population, announced the decision this week after proposing to delist the sea lion species last year.

"We're delighted to see the recovery of the eastern population of Steller sea lions," Jim Balsiger, administrator of NOAA Fisheries' Alaska region, said in a statement. "We'll be working with the states and other partners to monitor this population to ensure its continued health." [Images: Sea Lion Pups Make a Splash]

Steller sea lions, whose scientific name is Eumetopias jubatus, are the largest of the eared seals. Historically, the animals had been hunted for their meat and hides and killed by fisherman who blamed the animals for stealing their catch. The creatures were first added to the Endangered Species List in 1990 in light of evidence that the species had experienced a steep decline over the previous decades.

According to biologists' estimates, the number of eastern Steller sea lions had dwindled to around 18,000 by the late 1970s. But by 2010, the population had bounced back to more than 70,000 individuals, NOAA officials said. That translates to a growth rate of 4.18 percent each year, exceeding the federal agency's recovery criteria.

The Endangered Species Act, signed by former President Richard Nixon, was one of the most powerful laws to come of the environmental movement of the 1970s. When an animal gains protection under this law, biologists and federal wildlife officials must outline a plan to help the species recover and determine how to measure the success of their conservation efforts. The recovery plan for the eastern Steller sea lion, revised in 2008, set a goal of a 3 percent annual population growth rate.

Federal officials say they will continue to work with state marine wildlife managers in Alaska, California, Oregon and Washington to monitor potential threats to the sea lions, including boat strikes, energy exploration, habitat destruction and fishing.

Under the new rule, the western group of the species, which is genetically distinct and ranges from Alaska to the Pacific coast of Russia, will hold on to its endangered classification. NOAA Fisheries officials say they are investigating reasons why the eastern population has recovered while the western Steller sea lions have not.