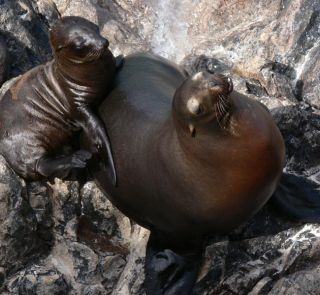 Female California sea lions that have lost a baby are willing to unite with a pup that has lost its own parents, according to research that has produced the first evidence of adoption among these aquatic mammals living off the west coast of North America.

While it is not uncommon for animals to provide care for others' babies, such as occasional nursing or baby-sitting – a trait shared with humans and known as alloparenting – evidence of adoption is much less common, according to Ramona Flatz, who conducted the research as a graduate student at Arizona State University. This is, in part, because adoption can be difficult to identify, she said.

At two sites in the Gulf of California, Flatz captured pups, gave them what she refers to as "unique haircuts" (an identifying code shaved onto their backs) and took toe clippings for DNA analysis. Later she collected biopsies from the females from whom the pups were nursing. She then compared specific points in the mothers' and pups' genetic codes to determine if they were related.

At one site, on San Jorge Island, six out of 109 pairs were not related. The second site, Los Islotes Island, had a higher proportion: nine out of 51.

Because California sea lion pups show a strong preference for their own mothers, and mothers are able to recognize their own cubs and react aggressively when someone else's pup comes within a couple of feet, the nursing of an unrelated pup is likely evidence of adoption, not alloparenting, according to Flatz and her co-author, Leah Gerber.

"In all these adopt events, what we know is females are nursing a single pup and that pup is not her own," Flatz told LiveScience.

For roughly the first year of their lives, pups are completely dependent on their mothers for survival, so by adopting an orphaned pup, a lactating mother who has lost her own pup or miscarried saves its life, Flatz said.

Ultimately, adoption, even at low rates, has the potential to influence long-term population growth among the sea lions, according to Flatz and Gerber's report, which was published in the open-access journal PLoS ONE Nov. 8.