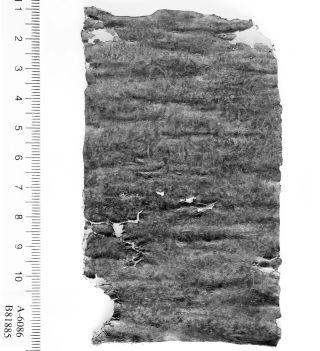 Israel Antiquities Authority archaeologists excavated a 1,700-year-old curse tablet from a Roman mansion in the City of David in Jerusalem. In the tablet a woman named Kyrilla curses a man named Iennys, likely over a legal case.
(Image: © Photo courtesy Robert Walter Daniel)

A lead curse tablet, dating back around 1,700 years and likely written by a magician, has been discovered in a collapsed Roman mansion in Jerusalem, archaeologists report.

The mansion, which is being excavated by the Israel Antiquities Authority in the Givati Parking Lot, is located in what is known as the "City of David," an area that holds at least 6,000 years of human occupation. The mansion itself covers at least 2,000 square meters (about half an acre) and contains two large open courtyards adjacent to each other. It was in use between the late third century and A.D. 363, when it was destroyed in a series of earthquakes on May 18 or 19.

The text is written in Greek and, in it a woman named Kyrilla invokes the names of six gods to cast a curse on a man named Iennys, apparently over a legal case. [See Photos of the Ancient Curse Tablet]

"I strike and strike down and nail down the tongue, the eyes, the wrath, the ire, the anger, the procrastination, the opposition of Iennys," part of the curse reads in translation. Kyrilla asks the gods to ensure that "he in no way oppose, so that he say or perform nothing adverse to Kyrilla … but rather that Iennys, whom the womb bore, be subject to her…"

To obtain her goal Kyrilla combined elements from four religions, Robert Walter Daniel, of the Institut für Altertumskunde at the University of Cologne, told LiveScience in an email. Of six gods invoked, four of them are Greek (Hermes, Persephone, Pluto and Hecate), one is Babylonian (Ereschigal) and one, Abrasax, is Gnostic, a religion connected to early Christianity. Additionally, the text contains magic words such as "Iaoth" that have a Hebrew/Judaism origin.

A professional magician likely created the curse for Kyrilla, who may have literally used a hammer and nails to perform a magical rite that enhanced the effectiveness of the curse, Daniel said.

"The hammering and nailing is a form of gaining control over the person(s) targeted in magical texts," he wrote in the email.

Kyrilla and her curse-recipient, both probably members of the Roman middle or upper class, were likely in some legal dispute, as the curse tablet bears similarities to others found in Cyprus that are known to have been used in legal cases. Additionally the word "opposition" in this text hints at a legal matter.

The newfound artifacts hint at the wealth the occupants of the mansion would have enjoyed and include a miniature head of a boxer athlete used as a scale-weight and several gems, including one engraved with an image of Cupid holding a torch.

The curse tablet itself was excavated in the northwest part of the mansion. While the second-floor room where the tablet was originally placed has collapsed, the artifacts excavated near the tablet provide hints about what the room may have looked like when in use. [In Photos: Two Black Magic Curse Tablets]

Archaeologists Doron Ben Ami and Yana Tchekhanovets, both with the Israel Antiquities Authority, told LiveScience in an email they discovered the remains of mosaics and frescos that contain geometric and floral motifs near the tablet. They also found carved bone fragments from a box that depict the "Triumph of Dionysus," a Greek god, along with maritime imagery such as seahorses.

The team also uncovered roof tiles in the mansion that contain the stamp of the Roman 10th legion, a unit that, for a time, was stationed in Jerusalem. "This practice is common for all the provinces of the Roman Empire. In peaceful times soldiers were responsible for 'civil engineering': They built roads and aqueducts, produced tiles and bricks, etc. The 10th legion produced so many tiles, that it was enough for many more years of construction activity in the city, long after the legion itself left Jerusalem," Ben Ami and Tchekhanovets said.

The researchers also found female figurines, probably depicting a goddess. They were likely used in a "private cult" whose members included residents of the mansion. These figurines were found at or below floor level and may not have been part of the second-floor room that the curse was placed in.

The researchers do not know the purpose of this second-floor room. However, Iennys appears to have been connected to it to such a degree that the curse tablet was placed there intentionally. "Since the curse is directed against Iennys it might have been hidden in or close to a place that he frequented," Daniel wrote in the email. Perhaps lennys lived or worked in the mansion or a courtroom was located near the second floor room, Daniel said.

The discovery was detailed recently in the journal Zeitschrift für Papyrologie und Epigraphik.