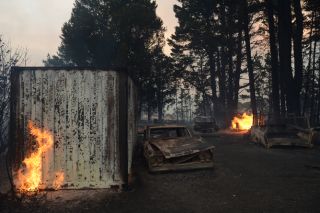 We could prevent scenes like this.
(Image: © AAP Image/Dean Lewins.)

Yet again we are seeing tragedy unfold in NSW (New South Wales), where more than 90 fires are currently burning. Yet, as with many issues of profound importance, as a society we seem unable to make the links between conditions and events in order to take preventative action.

Part of the problem is that prevention isn’t sexy or flamboyant. There are no pictures of “grateful people” who are recovering, or villains to blame.

Prevention success is very hard to measure. How do we know that the tragic event or fire was prevented by the quiet, background work that was undertaken which provided support and treatment for a troubled person?

Accepting that this type of intervention work is effective is hard in a context which requires “measurement”, “indicators”, KPIs and evidence for outcomes.

I’ll try and outline the events which need to be connected.

Six years ago we were warned by the IPCC that one consequence of climate change is an increase in extreme events, including fires. Bushfires will be likely to occur more often, be more severe and harder to extinguish.

One consequence of our failure to adequately address the problem of climate change is that we will experience severe bushfires – and we are.

The Abbott Government is planning to stop the price on carbon. While this scheme had shortcomings, it sent a message to the Australian public, had minimum impact on cost of living (less than 0.7% increase in the cost of living) and it compensated (perhaps over-compensated many) those who could least afford price rises.

The form of policy to replace a price on carbon is still very uncertain. Thus, unless substantial action is taken to reduce greenhouse gas emissions, Australians will have to put up with tragic bushfires.

Of the up to 60,000 bushfires which occur in Australia annually, it is thought that close to half of these are deliberately lit.

Arson is used here in a broad sense – about 30% are known or suspected to be deliberately lit; about 20% are accidental fires, often arising from reckless behaviour; and a large 42% have an unknown cause.

A recent estimate of the cost of arson sits at about $1.1 billion annually for Victoria. This is an under-estimation as externalities, such as the social and emotional cost and loss of ecosystem services, are not factored into this amount.

The reader will note that I’ve used the words “about”, “under-estimation” and “thought”, as well as rather dated information. This is no accident. Our knowledge about acts of arson and of how to prevent them occurring is extremely poor. There are very few resources given to better understanding - and preventing - this problem in Australia.

Similarly, while there are a few education programs for juveniles who light fires, there are few places where juveniles or adults can get treatment or intervention to prevent this fire-lighting behaviour continuing.

Australia’s population is rapidly increasing, mostly around the major urban centres, particularly Sydney and Melbourne. These cities are pushing into the surrounding bushland areas, commonly the outer fringes where the cost of housing is the lowest, but the infrastructure and service provision – transport, education, employment – are the poorest.

Often young people are languishing in these areas, many of whom don’t work or go to school. In July 2012, almost one-third of 15 to 19 year olds were unemployed in Victoria. This is the very age when there is a high propensity to light fire – 40% of arson offenders are adolescents.

Link all these factors together and we have a problem. We have been warned about the increase in severe fires which will be associated with climate change. Arson occurs many times in Australia and we know very little about the patterns and characteristics of arson as few resources are given to researching this issue. Australia’s population is growing and it could be assumed that the number of people with a propensity to commit arson is growing at the same rate. This increasing population is moving into areas where there is a high risk of bushfire

In Australia, we have a choice about what we value, what we want to protect, and where we spend resources. It is vital that we understand that these choices are ours to make.

It is clear to me that we need to make choices around bushfire and arson. Do we want to increase the prevention response to reduce the occurrence of arson? Or are we prepared accept that bushfires will occur, with potential loss of life, property, livelihoods and the environment and society being severely disrupted and possibly highly traumatised?

Is the cost of these fires now so high as to warrant a determined effort to reduce the occurrence? Are we prepared to put in place policy that is of sufficient magnitude to adequately reduce greenhouse gases, resources to better understand and thereby put in preventative measures?

This includes a much broader canvas of approaches than the current heavy reliance on cool-burning and clearing as the dominating response to the prevention of bushfires. It will be a complex and costly response, but it is what the scale of the problem requires.