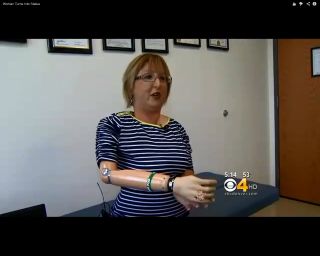 Ashely Kurpiel, who has the rare disease fibrodysplasia ossificans progressiva, or FOP, demonstrates the use of her new bionic arm.
(Image: © YouTube screengrab from CBS Denver)

At age 3, Ashley Kurpiel was diagnosed with cancerous tumors in her right arm. Only after doctors surgically removed the young girl's arm and shoulder did they discover that she didn't have cancer.

Instead, Kurpiel, 31, has an extremely rare genetic condition known as fibrodysplasia ossificans progressiva, or FOP. The disease is sometimes called "stone man syndrome," because the muscles, tendons and ligaments of people with the disease are gradually turned to bone. "I describe it today like saying 'I'm turning into a human statue,'" Kurpiel told CBS Denver.

Doctors at the Denver Clinic for Extremities at Risk have now given Kurpiel a hand — literally. She was outfitted with a prosthetic arm that attaches to her torso. Sensors on her myoelectric arm prosthesis can detect minute electrical charges created when Kurpiel twitches a muscle. Small motors in the battery-powered arm respond to those twitches, allowing her to move her new prosthetic arm and hand. [The 9 Most Bizarre Medical Conditions]

Kurpiel is one of about 800 confirmed cases of FOP worldwide, according to the International Fibrodysplasia Ossificans Progressiva Association (IFOPA). The disease strikes men and women equally, and it usually appears in childhood. One of the first signs of FOP is a deformation of the big toe; flare-ups of the disease can occur spontaneously or can follow common events like a fall while playing, an immunization shot or a viral illness like a cold or flu.

There's no known cure for FOP, but in 2006, researchers at the University of Pennsylvania isolated the gene responsible for the disease. Known as the ACVR1 gene, it directs the growth and development of bones and muscles, according to the National Institutes of Health. It's believed that a mutation leaves this gene stuck in the "on" position, resulting in an overgrowth of bone and the fusion of joints over time.

People with FOP gradually lose control of most of their limbs. "Eventually, I will be immobile from head to toe," Kurpiel told CBS. Nonetheless, she remains active and has learned how to surf using a modified board; she plans on taking a cruise in December.

"I've been blessed to meet so many truly amazing people, especially the Dalai Lama — that was a real honor," Kurpiel told the Daily Mail, referring to the religious leader, whom she met in 2007. She's also quickly adjusting to life with her new prosthetic arm, which enables her to hold a drink, handle a cellphone and eat.

"I put a cookie in there and just go for it," Kurpiel told CBS.