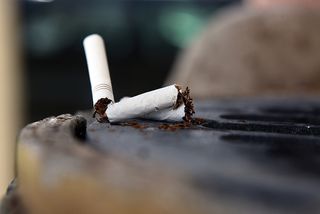 Tobacco use causes more than five million deaths every year across the world.
(Image: © MilitaryHealth/Flickr.)

Editors of journals published by the BMJ Group will no longer consider publishing research that is partly or wholly funded by the tobacco industry, the journals have said in an editorial published this week.

Editor-in-chief of BMJ Open Trish Groves said editors of the BMJ, BMJ Open, Heart, and Thorax could no longer “ignore the growing body of evidence – from the tobacco industry’s released internal documents – that the industry continues to actively play down the risks of its products.”

“What’s worse is that scientific journals have published potentially biased studies that were funded by industry, often without realising that research funding bodies that sounded independent and academic were largely paid for by industry.”

Other journals that have previously introduced such bans include PLOS Medicine in 2010 and the journals published by The American Thoracic Society in 1995.

The journals' policy change comes in the wake of a recent scandal involving Phillip Morris in the United Kingdom where the government was considering mandating standard packaging for tobacco products.

Leaked confidential documents showed the company was using a sophisticated lobbying campaign to target politicians and civil servants it believed would support its position against the move.

Professor of public health at Curtin University, Mike Daube said he had “huge respect” for the journals' decision.

“I think this is a really important step forward, it emphasises that medical journals should not be part of, or play any role in promoting tobacco companies and the tobacco industry.”

Ethicist and professor of medicine at Monash University, Paul Komesaroff said the move raised questions about whether the ban should be extended to other industries.

“If this principle is adopted, a question then arises is how far further we take it, he said. "Clearly, there are other companies that are involved in activities that might be regarded as being contrary to public health.”

Professor Mike Daube said there was a strong case for the journals to take a similar position with regard to the alcohol industry.

The journals have not ruled out banning research supported by other industries.

“We know already that other industries, such as ‘Big Food’ have followed suit in some of the ways they [the tobacco industry] lobby policymakers,“ Groves said. "If the evidence becomes strong enough that they have also distorted science, journal editors may consider similar bans on submissions of research funded by the food industry. But we’re not there yet.”