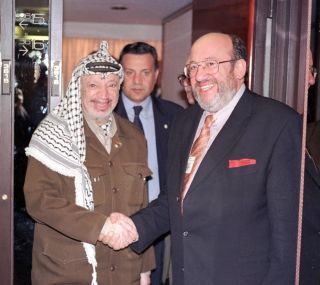 Little did scientists Marie and Pierre Curie suspect, when they discovered polonium in 1898, that the radioactive element would go on to have one of the darkest and most intriguing histories of any known substance.

In 2004, Palestinian leader Yasser Arafat died of uncertain causes in Percy Hospital in Paris. He complained of nausea and stomach pain, suffered liver and kidney failure, and eventually lapsed into a coma before dying. In 2012, Arafat's remains were exhumed because of persistent rumors that he was the victim of an assassination that used polonium as a deadly weapon.

A report published last week in the medical journal The Lancet confirmed that traces of polonium were found on Arafat's toothbrush, underwear and other personal items, fueling reports that he was assassinated. And Arafat isn't the first person who's believed to have been murdered by polonium. [The 13 Oddest Medical Case Reports]

Polonium can't penetrate unbroken skin, but if ingested or inhaled it can cause severe radiation damage to bodily tissues, organs and DNA, according to the U. S. Nuclear Regulatory Commission. Exposure to polonium also increases the risk of cancer, while an amount smaller than a grain of salt is enough to kill an adult.

'The angel of death'

Alexander Litvinenko, a Russian political dissident, was living in London in 2006 when, on Nov. 1, he was enjoying a pot of tea in the Pine Bar of the Millennium Hotel with two other Russian men. Later that day, he became severely ill, and it wasn't long before poisoning was suspected.

Tests eventually discovered that polonium-210 (an isotope of polonium) was not only in Litvinenko's body, but was found in lethal amounts throughout the Pine Bar and the adjacent kitchen area. One of Litvinenko's dining companions, Andrei Lugovoy, was a former KGB officer who emerged as a prime suspect in the poisoning.

Litvinenko died a few weeks later, but on his deathbed, he accused Russian president Vladimir Putin of orchestrating his assassination. "As I lie here I can distinctly hear the beating of wings of the angel of death," Litvinenko said in a statement, according to the Washington Post. "You may succeed in silencing one man, but the howl of protest from around the world will reverberate, Mr. Putin, in your ears for the rest of your life." [How 13 of the World's Worst Dictators Died]

The assassination set off an international scandal: British Prime Minister Gordon Brown called it "intolerable" that Russian authorities refused to extradite Lugovoy for trial. "You cannot have people assassinated on British soil, and then discover that we wish to arrest someone who is in another country, and not be in a position to do that," according to the Telegraph.

Putin dismissed Brown's statements as "insulting," and the case remains a diplomatic sticking point between the two nations — and a chilling reminder that Cold War-style political intrigue is not just the stuff of Tom Clancy thrillers.

The eight years that passed between Arafat's death and the time his body was exhumed for examination have made it more difficult to determine a cause of death, partly because polonium-210 has a biological half-life — the time needed for its levels in the body to fall by half — of just 50 days, and because Arafat's widow requested no autopsy following his death, the Guardian reports.

"An autopsy would have been useful in this case because, although potential polonium poisoning might not have been identified during that procedure, body samples could have been kept and tested afterwards," the authors of the Lancet report wrote.

Nonetheless, the authors found evidence that "support the possibility of Arafat's poisoning with polonium-210," adding that "although the absence of myelosuppression [decrease in bone marrow activity] and hair loss does not favor acute radiation syndrome, symptoms of nausea, vomiting, fatigue, diarrhea and anorexia, followed by hepatic and renal failures, might suggest radioactive poisoning."

The evidence that Arafat might have been killed by polonium has reignited some claims that he was assassinated, either by political rivals within the Palestinian community or by Israeli authorities, a claim that Israel has repeatedly denied.

A trail of death

Arafat and Litvinenko aren't the only two people who are suspected of dying after exposure to polonium, which Marie Curie named after her beloved native Poland.

Irène Joliot-Curie, the daughter of Marie and Pierre Curie, may have been the first person to die of exposure to polonium, possibly related to a laboratory accident in 1946 (like her parents, Irène was a noted scientist who won the Nobel Prize in chemistry in 1935). She fell ill shortly thereafter and died of leukemia in 1956.

Despite its hazards, polonium — a soft, silvery-gray metal — does have some industrial applications. It can be used to eliminate static electricity in machine processes such as paper rolling and fiber spinning, according to the International Atomic Energy Agency.

And because of its radioactivity, polonium-210 has been used as a heat source in satellites and in the Soviet 1970s-era Lunokhod moon rovers.