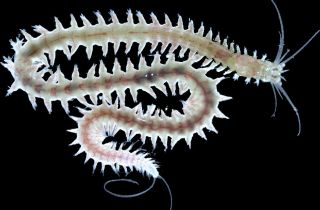 Bristle worms have two body clocks: a circadian clock and a lunar clock that helps them know when to spawn
(Image: © Zhang et al., Current Biology)

Most animals have a circadian clock that helps them distinguish night and day, but now researchers have found coastal animals seem to be equipped with a separate clock to track time via the tides.

The evidence comes from the discovery of internal clock genes that help some marine animals track the ebb and flow of the tides, according to two studies detailed today (Sept. 26) in the journals Current Biology and Cell Reports.

"The discovery of the circadian clock mechanisms in various terrestrial species from fungi to humans was a major breakthrough for biology," said Current Biology study co-author Charalambos Kyriacou of the University of Leicester, in a statement. "The identification of the tidal clock as a largely separate mechanism now presents us with an exciting new perspective on how coastal organisms define biological time."

Though the tidal clocks have only been found in two species so far, it's possible that multiple internal clocks could be widespread in sea-dwelling — and perhaps land-dwelling — creatures.

But for animals at sea, life is guided by the ebb and flow of the tides, caused by the moon's gravitational pull on the Earth. For instance, a crustacean called Eurydice pulchra swims out in search of food with the incoming tides, then burrows in the sand once the tide departs. [6 Wild Ways the Moon Affects Animals]

To understand how animals keep track of this ocean rhythm, Kyriacou and his colleagues caught Eurydice pulchra off the coast of Wales every season, then identified their circadian clock genes. When they turned off those genes or disrupted the circadian cycle by exposing the creatures to bright light for several days, they found that cells linked to natural sunscreens were completely thrown off.

Yet like clockwork, the crustaceans still swam out every day on 12.4 hour cycles, suggesting the creatures had a separate internal clock anchored by the tides.

"This shows that the 12.4 hour clock is independent from the circadian clock. I expect tidal rhythms in many coastal organisms will follow this rule, including insects, crabs, even plants," Kyriacou said.

In another study, researchers took a look at marine bristle worms. Bristle worms sync their spawning seasons to the waning of the moon: Most mating happens under a new moon and almost disappears during full moons.

Yet when the researchers disrupted the bristle worms circadian clocks, their monthly lunar clock still ticked on. Their lunar clocks, however, seemed to affect the timing and power of circadian-based behaviors.

"Our results suggest that the bristle worm possesses independent, endogenous monthly and daily body clocks that interact," said Kristin Tessmar-Raible, co-author of the study detailed in Cell Reports and a researcher at the University of Vienna, in a statement. "Taking this together with previous and other recent reports, evidence accumulates that such a multiple-clock situation might be the rule rather than the exception in the animal kingdom."