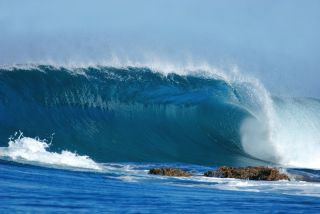 A massive wave barreling toward the shore.
(Image: © Shutterstock)

Around midnight on January 27, 1700, a mysterious tsunami stole through several villages on the eastern coast of Japan.

The waves reached as high as 12 feet and flooded rice paddies, washed away buildings and damaged fishing shacks and salt kilns. Sleeping villagers awoke startled and wet and had to hastily scramble to high ground. The waters knocked down oil lamps and started a fire in one village and destroyed 20 houses in another.

The waves pounded the villages all through that night and into the late morning of the next day.

They swept through Miho, a village about 90 miles (140 kilometers) southwest of what is now Tokyo, about seven times.

The tsunami struck not only without warning, but without an apparent cause. Normally, tsunamis are preceded by earthquakes: the deadly Indian Ocean tsunami that devastated Southeast Asia last December, for example, was foreshadowed by a magnitude-9.3 undersea temblor.

Residents nearest a tsunami-causing earthquake sometimes experience both events, and in fact many islanders have known for generations to head for the hills when the ground starts moving.

But in the days leading up to the 1700 tsunami, no earthquakes had been detected. Miho's leader wrote that such a thing was unheard of and wondered what to call the waves.

"It is said that when an earthquake happens, something like large swells result, but there was no earthquake in either the village or nearby," he wrote.

With no parent earthquake to claim it, the tsunami was labeled an "orphan."

Three centuries later, an international team of scientists and scholars has linked the orphan tsunami to a massive earthquake that struck a region in North America called Cascadia.

Cascadia is located in the northwestern United States and is bounded on the east by the Cascades—the mountain range that includes the volcanic Mount St. Helens—and on the west by the Pacific Ocean.

An earthquake-prone fault line, called the Cascadia subduction zone, runs down the length of the region. It begins in Vancouver, Canada, continues down through Washington and Oregon and ends in northern California.

The fault line separates two of the many tectonic plates that make up Earth's surface: the North American Plate and the much smaller Juan de Fuca Plate.

It is now known that the Cascadia subduction zone is active and that the Juan de Fuca Plate is sliding under the North American Plate at an average rate of about 13 feet (4 meters) per century.

Based on geologic evidence, scientists think that a massive magnitude-9.0 earthquake rocked the region sometime between 1680 and 1720. The quake must have lasted for several minutes because it caused parts of coastal Washington to plummet by as much as 5 feet (1.5 meters) relative to coastal waters.

In 1997, analysis of tree-rings from the Cascadia region narrowed the time of the natural disaster to a 10-month window, from August 1699 to May 1700.

The Japanese written accounts of the orphan tsunami allowed the earthquake to be dated even more precisely. Scientists knew that an earthquake as massive as the one that occurred in Cascadia would have spawned an enormous tsunami—one that could easily travel across the Pacific to affect Japan. The two events had to be related, scientists thought.

The researchers knew that a tsunami speeding across the Pacific Ocean travels at jetliner speed—about 500 mph—and it would take about 10 hours for a tsunami originating in Cascadia to reach Japan.

"The travel time is almost what I'd do if I took a plane from Seattle and went to Narita [airport in Japan]," said Brian Atwater, a geologist with the U.S. Geological Survey. Atwater is also a co-author of The Orphan Tsunami of 1700, a book that will be published in Jan. 2006 telling the story of how the two natural disasters were linked.

The Japanese written accounts of the tsunami say that the first waves were felt around midnight on Jan. 27 Japan time. Therefore, scientists estimate that the earthquake that generated the tsunami must have struck sometime between 9 and 10 pm Pacific Standard Time on Jan. 26, 1700.

Unraveling the orphan tsunami mystery paid off in two ways, Atwater said. The first was that it allowed scientists to pinpoint the date for the Cascadia earthquake with a precision that would have been impossible if they had relied only on geological and tree-ring evidence.

Secondly, it raises the bar considerably for what the magnitude of an earthquake occurring along the Cascadia subduction zone can be. The tsunami showed that the risk of a major earthquake striking the Cascadia region not only existed but that it had manifested itself at least once in the recent past, Atwater said.

This information is crucial for tsunami and earthquake emergency planners.

"In the case of a tsunami, you need to know how big of an earthquake can happen along a subduction zone to provide the starting point for a tsunami model," Atwater said.

In the late 1980s, scientists began to realize that this kind of thing happens often enough that they had to take precautions, but the question was, what size earthquake should tsunami modelers assume?

"There was plenty of respectable scientific opinion at the time that an earthquake of a magnitude-9 was just ludicrous," Atwater told LiveScience. "A tsunami modeler in the late 1980s could not have assumed an earthquake of that magnitude without being called an alarmist or being laughed at."

Discovering the details of the 1700 earthquake helped change that. If the past is any indication, scientists predict that the Cascadia fault line will produce a strong earthquake every few centuries. The fault line may break piecemeal and cause a series of minor quakes, or it might break along its entire length. If that happened, the region would experience another massive event similar to the one that struck in 1700.

"This is just becoming mantra," Atwater said. "I don't think there's skepticism about that now, especially after what people saw on their television screens a year ago. There's respect now for what nature can do."