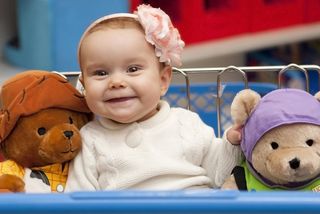 Despite never having performed surgery or dissected an animal, 8-month-old babies expect living creatures to have insides, new research suggests.

The study, detailed Sept. 3 in the journal Proceedings of the National Academy of Sciences, revealed that tots expected self-propelled objects to have guts and were surprised when those objects were hollow.

The results suggest babies have an innate ability to understand the basic biology of animals.

"Young children expect animals to have different insides from inanimate objects, and they realize that an animal's insides are important for its survival," study co-author Peipei Setoh, a psychology doctoral candidate at the University of Illinois at Urbana-Champaign, said in a statement. "They know that if you remove the insides, the animal can't function." [11 Surprising Facts About a Baby's Brain]

Babies may look like blank slates, but a lot is going on behind those chubby cheeks and wide eyes. Some studies suggest babies have moral compasses, and other research has found that infants have an intuitive grasp of physics and even statistics.

But whether they had a similar sense about biology wasn't clear.

So Setoh and her colleagues showed a variety of toys to babies as young as 8 months. Some of the objects were both self-propelled and able to respond to their environment (a sign that they had mental states). Other objects had just one of those traits, and still other toys were completely immobile.

Then, the team opened up the objects, revealing hollow insides.

The babies looked longer at the toys that moved on their own and responded to environmental cues. That suggested the youngsters viewed these objects like animals with guts and were surprised by their empty insides.

In a second experiment, the team showed furry objects to tots, before revealing the furballs were hollow. Because even young babies know that animals have fur, the tots once again looked longer at their hollow insides than at the non-furry objects that were hollow, suggesting their expectations were confounded.

The findings suggest infants have awareness of how animals operate.

"When babies encounter a novel object that is both self-propelled and agentive, they categorize it as an animal, and they assume it has insides,” study co-author Renée Baillargeon, a psychology professor at the University of Illinois Urbana-Champaign, said in a statement.

It's not clear why babies come wired with a built-in biological intuition, but one possibility is that it helped them identify prey or flee from dangerous predators in our evolutionary past, the researchers note.