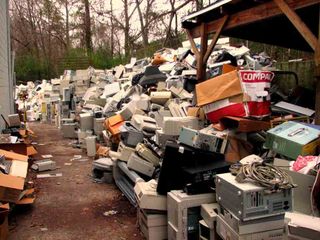 Only about 25 percent of e-waste is collected for recycling.
(Image: © Curtis Palmer)

What do you do when you want to trade that cellphone, computer or television in for a newer model?

Too often, Americans simply throw these items away, even though many types of electronic waste are technically illegal to trash in many states, said Jean-Daniel Saphores, an applied economist at the University of California-Irvine. But these bans basically don't work, his research has shown, Saphores told LiveScience. Saphores studied the rates of recycling around the United States, and presented his research on the topic, and his proposals to improve e-waste recycling, at a talk yesterday (Sept. 9) at the annual meeting of the American Chemical Society in Indianapolis.

Simply throwing away electronic waste, or e-waste, presents environmental problems, both in the United States and in developing countries where much of it is shipped for disposal and recycling. But changing peoples' actions requires changing the disposal system, Saphores said. [7 Everyday Toxic Things You Shouldn't Trash]

His solution is to institute a deposit system where people pay a little extra when they first buy electronics, and get a little money back if they return it, he said. "This already exists for car batteries, for example, and is in place for beverage containers," he said. "And it's working very well."

Currently the penalty for improperly disposing of e-waste — anything that contains an electronic circuit — is usually a warning at most. And it's basically impossible to police — how could anybody tell if you put a small electronic device in the trash? Saphores said.

According to the U.S. Environmental Protection Agency, about 25 percent of e-waste was collected for recycling in 2009, the most recent year for which data is available.

The improper disposal of e-waste is a growing environmental problem. E-waste often contains heavy metals like lead and mercury and has to be processed carefully, which often isn't the case, Saphores said. A large percentage of e-waste, likely most of it, also ends up in developing countries, Saphores said. Though reliable and up-to-date information and data are hard to find, a 2005 U.S. industry report cited by the EPA said that e-waste recyclers export about three-fourths of their used electronics for reuse, refurbishing and recycling.

"Improper disposal takes place in developing countries," Saphores said. "We don't have very solid numbers to link processing of this to health impacts, but we know exposure to a number of compounds in e-waste would have a number of potential health effects," he said.

One of those countries the trash ends up is China. Lead pollution from e-waste has likely tainted rice supplies in that country, Saphores said, mentioning a 2008 study in the journal Chemosphere that showed the link.

A major problem is a lack of hard figures, due in part to the fact the e-waste isn't carefully tracked, he said.

The dearth of information also extends to e-waste disposal. One way to improve this would be to make manufacturers responsible for the ultimate fate of their products, and make them easier to disassemble and recycle, Saphores said.

E-waste can contain precious metals, like so-called rare-earth elements, that may be profitable to recycle, Saphores said. Not recycling this stuff "is shortsighted — because there is a small supply and we depend on a few suppliers, like China," he added.

Various estimates suggest that Americans were holding onto 84 million obsolete or broken television sets in 2010, and that number has likely grown; people were also holding onto 200 million old or damaged cellphones. A deposit system could help people recycle those items instead of trashing them, Saphores said.

To find out where e-waste can currently be recycled, people should consult their local or state governments, since rules vary based on location, Saphores said.