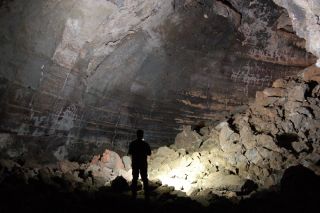 Eight new arthropod species and a new hibernating site for Townsend's big-eared bats have been discovered in New Mexico lava-tube caves, adding to the limited ecologic understanding of this unique habitat type.

The resource management team of El Malpais National Monument conducts routine, large-scale inventories of the caves to document roosting and hibernating sites of bats, and the habitat range of other animal species. But these sweeping surveys often overlook more elusive species hiding in remote corners of the caves.

To develop a more comprehensive inventory of the national monument's animal life, a team of researchers based at Northern Arizona University conducted a systematic study of 11 caves aimed to document all inhabitants of those caves. The results were recently published in the summer issue of the journal Park Science. [Images of New Lava-Tube Arthropod Species]

"Caves don't give up their secrets easily," said study author Jut Wynne. "It takes a lot of work at any given cave to have a baseline understanding of what's going on ecologically."

The team used a variety of methods to collect and identify as many specimens as possible, including trapping invertebrates in plastic containers baited with peanut butter, and setting up 1-square-meter plots (10.8 square feet) and documenting all animals crawling within those plots during a 20-minute period.

Aside from dozens of known species, the team discovered eight new species of arthropods (a group of animals that includes insects, spiders and crustaceans), including a spider, a mite, two springtails, a cricket, a beetle and a planthopper. The new spider and planthopper — a grasshopperlike species that can look like a leaf in its adult form — appear to be cave-adapted, meaning they live their entire lives in the complete darkness of caves, as opposed to animals that split time above and below ground. Cave-adapted animals take on a variety of distinct characteristics, often including limited vision, light-colored pigmentation and long appendages adept at speedily navigating cave terrain. [Amazing Caves: Pictures of Earth's Innards]

The new species do not come as a big surprise, since cave-adapted species generally only occupy a limited number of caves, but El Malpais National Monument park rangers still appreciate the discoveries as valuable additions to the park inventory.

"What it tells us is that there is just a world of unknown ecosystems and creatures, and a wealth of research yet to be done underground," said David Hays, branch chief of natural resources at the El Malpais National Monument. "I think it's just the tip of the iceberg.”

The team also discovered a hibernating colony of about 100 Townsend's big-eared bats in a cave that generally attracts lots of tourists due to its close proximity to the road and a parking lot. The park management has decided to close that particular cave to the public for the winter to allow the bats to hibernate undisturbed.

"The more we know, the better we can make informed decisions in balancing our mission to both preserve these natural worlds for future generations while also figuring out a safe and sustainable way to let the public enjoy them," Hays said.

The Northern Arizona University team hopes to return to the caves in the future to identify additional arthropod species, and potentially attach radio transmitters to bats to discover unknown tributaries of the cave systems.

Editor's Note: This article was updated to correct the collecting methods used in the study, and to indicate that Jut Wynne was the sole author of the study.