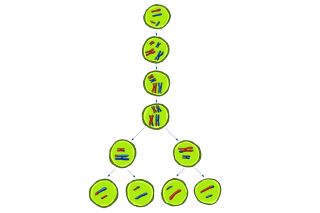 Meiosis is the process whereby chromosomes are copied, paired up and separated to create eggs or sperm.
(Image: © NIGMS.)

For many women who are pregnant, the early weeks bring joy — and worry. Although most pregnancies lead to fully developed little sweeties, nearly a quarter of them end in miscarriage. In some cases, this is due to the embryos having the wrong number of chromosomes. An extra or missing chromosome may also result in certain conditions, such as Down syndrome, which affects about one in 700 babies.

Researchers funded by the National Institutes of Health are making strides in understanding how chromosome errors occur and in applying their findings to the development of potential therapies.

Most of our cells have 23 pairs of chromosomes, with one set from our mother and the other from our father. An abnormal number of chromosomes can arise during meiosis, the type of cell division that creates eggs and sperm, or germ cells. For example, when the chromosome 21 pair fails to separate, an egg cell may end up with two copies. After the egg is fertilized by a sperm, the resulting embryo has three copies of chromosome 21 — and will have Down syndrome. People with this condition have serious medical problems, including heart defects, intellectual disabilities, premature aging and certain forms of leukemia.

Because Down syndrome is caused by the presence of three chromosome copies, it's called a trisomy. In addition to Down syndrome, other trisomies that can be screened for in early pregnancy include trisomy 18 (Edwards syndrome) and trisomy 13 (Patau syndrome).

Much research into the origin of chromosome miscounts has focused on understanding how chromosomes typically pair and separate during meiosis to create chromosome copies for new cells. For instance, Angelika Amon of the Massachusetts Institute of Technology studies the processes that regulate gluelike protein complexes called cohesins. Cohesins hold chromosome pairs together and then release them at a precise moment, first letting go of their arms and then their centers. Using yeast, Amon has identified protein molecules that control segregation through the loss of cohesins. Other research confirms that the proteins work similarly in humans, making yeast an excellent tool to study aspects of cell division.

As scientists gather more details about normal cell division, they can begin to understand what happens when the process goes awry. Amon has found that if cohesin loss occurs too early, the chromosomes don't split properly and attach in random ways, potentially leading to an abnormal number of chromosomes. Because chromosomes contain genes that encode proteins, cells with an extra copy of a chromosome also wind up with extra proteins that affect their function — and possibly that of the whole organism.

Particularly interested in why chromosome segregation errors are more common among older moms, Sharon Bickel at Dartmouth College is exploring what happens when eggs age. By studying aged eggs of fruit flies, an organism useful for investigating germ cell formation, she's learned that segregation defects are due to an age-dependent loss of connection between chromosomes. This loss is more likely to occur when cells are in a suspended stage of meiosis called diplotene, which human egg cells remain in for decades. Bickel says the findings strongly suggest that the processes she's observed in flies account, at least in part, for similar maternal age effects in women.

Research into chromosome segregation errors has important implications for one day mitigating their effects on an organism, says Amon. Drugs might be able to help cells with an extra chromosome enhance their systems for removing excess proteins, thereby restoring their molecular composition and diminishing symptoms triggered by the third copy.

Another possibility is a gene therapy that silences the extra chromosome in a trisomy, an approach recently demonstrated by Jeanne Lawrence of the University of Massachusetts Medical School. Using induced pluripotent stem cells derived from a person with Down syndrome, her research team inserted a gene called XIST into the extra chromosome 21. The gene, which normally turns off one whole X chromosome in females, rendered the chromosome copy and most of its genes inactive. The technique offers a proof of principle that the researchers plan to test in a mouse model of Down syndrome and use to further explore the biology of this and other trisomies.

While trisomy treatments are still a long way off, these and other basic research findings are aiding progress toward them.

Spotlighting the Ballet of Mitosis

Body's 'Doomsday Clocks' Count Down to Death, or Cancer