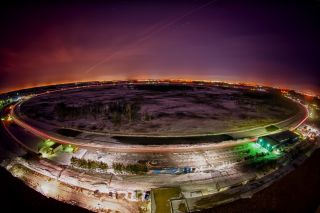 The Tevatron particle accelerator at Fermilab in Illinois.
(Image: © Fermilab)

Is there any more esoteric, almost mystical-sounding scientific field than particle physics? To the layperson, the discipline is shrouded in impenetrable particle names like anti-down quarks and neutralinos, and the counterintuitive rules of quantum mechanics. In an effort to make their field more concrete and meaningful to the rest of the world, a group of particle physicists has produced a series of videos on "Why Particle Physics Matters."

"I want to understand, why are we here? Why did the stars form in the way that they did? Why does matter exist at all?" said Hugh Lippincott of the Fermi National Accelerator Laboratory (Fermilab) in Batavia, Ill. "The universe is this great big amazing place, and we really only understand about 5 percent of it."

Particle physics is key to answering those questions, which are fundamental to all humans, Lippincott said in his video. "I believe particle physics is important because my nephew asks me why, and I want to be able to answer." [Images: The World's Most Beautiful Equations]

Twenty-nine physicists have created videos for the project, which is being run by Fermilab and the SLAC National Accelerator Laboratory in Menlo Park, Calif. All videos are available on the project's YouTube site here, and you can vote for your favorite among the top five here.

Some scientists likened particle physics to some of the great explorations of the past, where what will be revealed and what will be gained from the enterprise can't be known ahead of time. And like early explorers, physicists need support from the public to achieve their goals.

"While the leaders of the recent Higgs [boson] discoveries are the new Columbus and Lewis and Clarks, and me and thousands of colleagues are the crews, you are the Ferdinand and Isabella, the Jeffersons and American people, that commission these expeditions and send us out," said Breese Quinn of the University of Mississippi, addressing the public in general.

Plus, the tools developed for physics research often have wide-ranging applications. One scientist likened particle physics to mountain climbing, in terms of the spinoffs it produces.

"Is someone climbing Mount Everest useful to you in everyday life? Not at first glance," said Heidi Schellman of Northwestern University in Evanston, Ill. "But fleece jackets and breathable waterproof fabrics were first developed for serious mountaineering expeditions. Even when a challenge itself seems impractical, the new tools we build for it have long-lasting value."

And the benefits of physics aren't just in the discoveries it enables and the new tools it creates, but in the type of people it produces, one researcher said.

"The challenge presented by physics engages and sharpens the mind," said Elizabeth Worcester of Brookhaven National Laboratory in Long Island, N.Y. "It teaches us how to learn, how to think carefully and rationally, how to make use of existing knowledge, and when and how to innovate. A world populated by people with these skills is a better world."