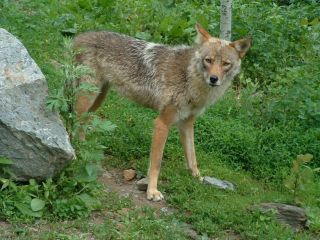 The coywolf is a hybrid species containing DNA from both coyotes and wolves.
(Image: © Jon Way | Eastern Coyote/Coywolf Research)

The coywolf is a coyote-wolf hybrid found throughout eastern North America, from Canada south to Virginia.

For decades, people incorrectly labeled coywolves as eastern coyotes. However, the large size of the coywolves — the animals are bigger than western coyotes, but smaller than wolves — has confused both scientists and laypeople alike since researchers first described the animals in 1969.

Over the years, scientists have proposed a number of hypotheses to explain the canines' large size. Recent studies have shown that eastern coyotes have both coyote (Canis latrans) and eastern wolf (Canis lycaon) ancestry. In 2010, a study published in the journal Northeastern Naturalist argued that eastern coyotes should more appropriately be termed "coywolves" (Canis latrans  x C. lycaon) to reflect their hybrid origin.

Many scientists now recognize the coywolf as one of four wild canine species in North America, the others being gray wolves (C. lupus), eastern wolves (C. lycaon) and western coyotes (C. latrans).

Researchers now believe coywolves first got their start at the southern end of Ontario, in Canada's Algonquin Provincial Park, in the early 20th century, when colonizing coyotes from the west bred with remnant populations of eastern wolves or a subspecies of gray wolves.

The animals are now expanding throughout eastern North America, and have become a point of concern among conservationists, who note that hybridization is a major threat to the recovery of wolves.

In addition to having a larger overall body than western coyotes, coywolves also have larger, stronger jaws and bigger skulls, which allow them to better hunt the plentiful white-tailed deer (Odocoileus virginianus) in eastern North America.

And like western coyotes — but unlike wolves — coywolves can adapt to all habitats, thriving in the countryside, in suburbs and in cities.