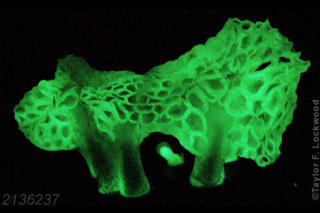 Mushrooms of the genus Favolaschia are well known to science, but scientists didn't realize the species of Favolaschia depicted in the image glows in the dark as it decays.
(Image: © Taylor F. Lockwood)

Taylor Lockwood is a mushroom hunter and photographer who has presented his work at shows throughout the world for over twenty-five years and has archived his photographs on the site Mushroom.Pro. Lockwood contributed this article to LiveScience's Expert Voices: Op-Ed & Insights.

On a recent trip to southern China, I came across glowing mushrooms while walking through a bamboo forest on my way home from dinner.

People have recognized bioluminescence in mushrooms for thousands of years, but the advent of LED lights, better photographic technology and expanding general interest have increased the numbers of known glowing mushroom species and the knowledge about such mushrooms.

The glowing mushroom I saw in China — part of my work supporting a Texas Tech University/National Science Foundation student research project — is a bamboo mushroom that's relatively common throughout tropical Asia. In the genus Favolaschia, it is characterized by having a lateral stem (stipe) and wide, bulbous pores instead of gills.

Yet, the fact that this species of Favolaschia is bioluminescent has apparently been unknown to science until I recognized the glowing this summer. Researchers that specialize in bioluminescence and the chemistry that causes it are now studying the fungus.

Not all Favolaschia are bioluminescent, and interestingly, this species from China only glows when it starts to decay — not when it is fresh, which is when many other fungi glow.

Asia, Brazil and Australia are hotspots for bioluminescent mushrooms, but the organisms are found all around the tropical world and in some temperate areas as well.

Researchers believe that the bioluminescence affects the dispersion of spores by attracting insects that carry them away while consuming the fungus or during other routine activities.

The bioluminescent mushroom hunts have been some of my most exciting, as I often go deep into the rainforest, alone, at night, and walk with the lights off as much as possible. In the past, I've had encounters with bats, snakes, spiders, peccaries and barking deer that can be absolutely hair-raising.

This trip is part of a worldwide quest to find and photograph bioluminescent mushrooms, whether known to science or not. Having already been to Madagascar, Brazil and China this year, I'm now planning my locations for 2014.

The views expressed are those of the author and do not necessarily reflect the views of the publisher.  This article was originally published on LiveScience.