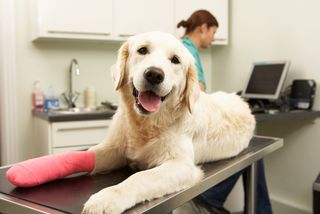 The mid-day rush of clients and their dogs and cats had just passed last Monday when members of the intake team from the Humane Society Veterinary Medical Association-Rural Area Veterinary Services (HSVMA) clinic peered out the door of a community gymnasium and saw a medium-sized brown and black dog with what appeared to be thick white whiskers all over her face.

The clinic had set up operations the day before in rural North Dakota, and as it has for the past 10 years, was tending to the needs of the animals on the Standing Rock Sioux reservation. Almost 50 veterinary students, technicians and veterinarians had traveled from all parts of the region to volunteer to help these animals and the people who love them. One veterinarian even came with her new husband to volunteer on her honeymoon.

Similar to what occurs with The HSUS's Pets for Life programs in urban settings, the HSVMA team has developed a relationship with the people of the Standing Rock community. Some residents bring their pets there year after year, all the records in hand, ready to get a rabies vaccine or just have a veterinarian look at a case of mange or fleas. Others were there for the first time, kids or grandkids in tow, anxious to have the family pet spayed or neutered or dewormed.

The brown and black dog waiting at the entrance to the gym last week came with two other family dogs . Her guardians explained that she had come home over a month ago with a face full of porcupine quills. They'd tried to pull them out with some pliers but she wouldn't let them. The family was worried because her appetite seemed off and her energy had diminished. And, with the closest veterinary care an hour's drive away, the family did not have the resources to get there — they had waited all month for the clinic to arrive.

The HSVMA team completed a full examination of the dog, whose name was Molly. They found ticks all over her, and signs of other parasites. The clinic's skilled anesthesia technicians anesthetized Molly and one of the most senior veterinarians, with students assisting, carefully began pulling out the quills. The surgical team then spayed Molly, who had already had one litter, and found her pregnant again.

Later that afternoon, another elderly couple came in with a large German Shepard suffering from a probable case of hip dysplasia. Two small dogs also came in, infested with fleas, but with fur so badly matted the veterinarians needed to shave the pets to get them any relief.

All told, the team treated about 675 animals on the one-week trip.

The veterinary students who join the trips often say it changes their lives — and they learn basic surgical techniques from some of the best veterinarians in the country. The veterinarians come back regularly, some negotiating with their bosses to ensure that every year they can have one week to give to the HSVMA program.

The veterinarians are also inspired by the energy and commitment of the students. The commitment was apparent in the compliment one vet was overheard giving a student as the entire team sat on a parking-lot curb eating tomato soup and garlic bread that a volunteer (a student's mother) had cooked: "I was impressed with the time you took explaining the aftercare that family needed to give that dog [who had just come out of surgery]. It was so late in the day and you acted like you had all the time in the world."

As that Monday came to a close, the team helped clean up the facility's kitchen and surgical area, unrolled their sleeping bags and mats and went to sleep for the night on the floor of the gymnasium, listening to the eight or so patients in cages next to them — including Molly — who had to be kept overnight.

The next day, the veterinary team released Molly to the care of the family, her tail wagging again — and the clinic once again came to life for another day of service.

Pacelle's most recent Op-Ed was Wolves at Risk? Michigan Allows Hunting of Protected Species. This article was adapted from Vets, Quill, Sioux, which first appeared as on the HSUS blog A Humane Nation. The views expressed are those of the author and do not necessarily reflect the views of the publisher. This article was originally published on LiveScience.com.