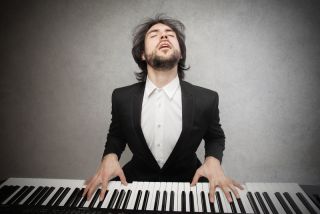 When it comes to music, the eyes may be more important than the ears.

People asked to identify the winner of elite piano performances tend to do better when they rely on visual — rather than auditory — cues, according to a study published today (Aug. 19) in the journal Proceedings of the National Academy of Sciences.

"We tend to overweigh and privilege visual information even in this type of domain," said Chia-Jung Tsay, a social psychologist at the University College London and a co-author of the study. [Optical Illusions: A Gallery of Visual Tricks]

Exactly how humans decide what makes music good is somewhat mysterious. Past research has revealed that musicians tend to be better than nonmusicians at reading emotions, and other research suggests that well-liked music enables people to synchronize, creating a group identity.

Tsay spent years training as a classical pianist, studied at the Juilliard School in New York and even performed at Carnegie Hall. After going through the competition circuit, she began to notice that the outcomes looked very different depending on whether judges relied on audio recordings or video recordings.

Tsay wanted to know what was accounting for the variation. She collected 6-second video clips of the top three finalists from 10 elite piano competitions. The team then asked 103 professional musicians and 106 musical novices to guess who won based on just the sound, just the video, or the sound and video together.

When the participants heard just the sound recordings, both the experts and the novices were no better than chance at picking the winners.

But with the video only, both groups picked the winner more than half the time.

Interestingly, watching both the sound and the video together made participants only marginally more effective at picking the winner compared with when they listened to the sound alone.

In a follow-up study, Tsay asked 262 participants to identify important music qualities, such as passion or creativity, in video or sound-only clips, and then compared their participants' ratings with real scores the judges gave to the performances in competition.

Once again, participants were better able to identify traits such as passion or motivation in the visual recordings.

The scientists aren't sure why visual cues would be so important in judging musical value, but they suspect the qualities people associate with great music are easily conveyed through visual cues. Humans probably evolved to weigh visual information more heavily, and that may influence musical decisions today, Tsay told LiveScience

"As a musician, it was kind of disturbing to wonder about all those years of training," Tsay said, "and then, in the end, what are we being judged upon?"