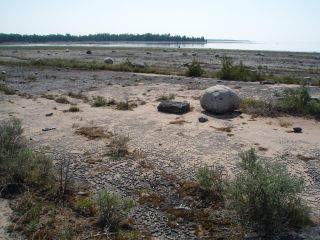 An Alvar beach in Manitoulin, Ontario — one of several sites studied for the IUCN's new Red List of Ecosystems.
(Image: © Chris Near, Nature Conservancy Canada)

Thanks to record rates of anthropogenic (human-influenced) climate change, ecosystems in some parts of the world will likely have to migrate several yards a day into cooler zones to keep up, says a new paper from researchers at Stanford University and the Carnegie Institution for Science.

Setting aside how difficult it is for trees to move several yards a day, the paper points out the problem is much more complicated than simply moving.

The paper is included in this month's special issue of the journal Science, which examines "Natural Systems in Changing Climates." One of the conclusions the authors reach is that "it is highly likely that [climate change] will intensify in the coming decades, unfolding at a rate that is [much faster] than the changes to which terrestrial ecosystems have been exposed during the past 65 million years."

Those results aren't surprising to folks who have been tracking the science, but the authors present their findings in a way that highlights the unprecedented velocity of anthropogenic climate change.

Even with big cuts in greenhouse gas emissions, the climate is likely to change about 10 times faster than terrestrial ecosystems have seen in the past 65 million years, and if society continues with business as usual, climate could change as much as 100 times faster.

Unfortunately, it's not just the rate of climate change that will affect ecosystems in coming decades. Different species move at different rates. Microclimates and soil types differ quite a bit across relatively short distances. Mountains only go so high and continents don't extend forever. Human land-use changes create physical barriers, and air and water pollution are additional stresses. Add it all up, and the challenges and consequences for the ecosystems we know and love are daunting.

Certainly a study revealing the stresses ecosystems face in a warming climate — indeed all of the articles in this special issue of Science — can be depressing. But the paper — which was co-authored by my thesis adviser, who is the most determined, clear-eyed optimist I've ever met — closes by noting that "the ultimate velocity of climate change is not yet determined ... the greatest sources of uncertainty — and greatest opportunities for modifying the trajectory of change — lie in the human dimension. As a result, the rate and magnitude of climate change ultimately experienced by terrestrial ecosystems will be mostly determined [by] human decisions, innovations and economic developments."