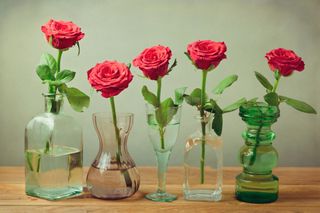 To prolong the life of fresh-cut flowers, florists recommend you use commercial flower preservatives.

The additives work by providing food in the form of sugar, fighting the growth of harmful microorganisms and allowing the plant to take in nutrients more efficiently by raising the acidity of the water (lowering its pH).

You may have heard that numerous homemade vase solutions — including water mixtures containing copper pennies, aspirin, vodka, sugar, 7-UP or bleach — mimic the effects of commercial preservatives. But do these home remedies actually work?

To start, pennies don't extend the life of your flowers. Though copper is a well-known fungicide, the copper in pennies isn't soluble, University of Florida horticulturalist Terril Nell wrote in a June 2004 article in Florists' Review Magazine.

Whether aspirin (acetylsalicylic acid) can effectively lower the pH of water and extend the life of fresh-cut flowers is up in the air. Some studies have found a positive benefit to using ground-up aspirin, while others have not.

Other home ingredients can help keep flowers fresh if used in conjunction with one another, according to experts from the University of Massachusetts Amherst (UMA).

A sugar solution can provide food for the flower, but it will also promote the growth of microbes. You can add bleach to the solution to control microbial populations, and citric acid to lower the water's pH.

Citrus soda, such as 7 Up and Sprite, can effectively make flower water both acidic and sugary, Susan Han, a UMA plant physiologist, told Scientific American. Han recommends concocting a solution of one part soda and three parts water, along with a few drops of microbe-killing bleach.

Vodka may also help preserve fresh-cut flower blooms. Vodka is often claimed to help flowers due to antimicrobial properties, but the spirit likely has a different effect, according to John Dole, a horticulturalist at North Carolina State University.

When you add a few drops of vodka to vase water, it probably delays wilting by inhibiting a flower's production of ethylene, a ripening gas that plants emit, Dole told Scientific American.