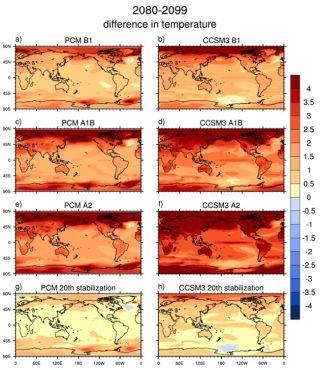 Predicted warming for the end of the century. Panels A-F involve low, medium and high carbon dioxide increases. Panels G and H are based on greenhouse gas concentrations stabilized as of 2000. Â© Science

COPENHAGEN, Denmark (AP) -- President Bush said in a Danish TV interview aired Thursday that adhering to the Kyoto treaty on climate change would have "wrecked'' the U.S. economy.

"Kyoto would have wrecked our economy. I couldn't in good faith have signed Kyoto,'' Bush told the Danish Broadcasting Corp., noting that the treaty did not include other nations -- including India and China -- that he called "big polluters.''

Earlier, British Prime Minister Tony Blair said climate change was likely the most serious threat to the globe and that there would be no solution without U.S. involvement. The United States is the world's biggest producer of greenhouse gases, which have been blamed for contributing to global warming.

"The only solution to this is going to come as one that includes America,'' Blair told a London audience of young people for an MTV special.

Later in the Danish interview, Bush called the U.S. dependence on oil from the Middle East a "national security problem.''

"We're hooked on oil from the Middle East, which is a national security problem and an economic security problem,'' Bush said, adding that the United States was looking at alternatives fuels.