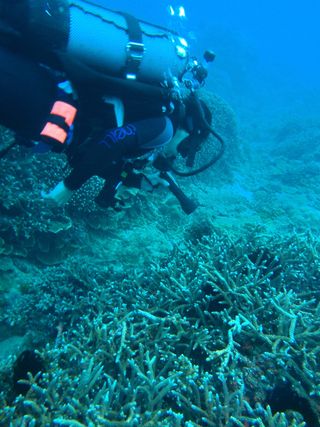 Near the southern tip of Taiwan lies the National Museum of Marine Biology & Aquarium, which is not only home to an amazing aquarium with everything from whale sharks to kelp forests, but also supports outstanding research facilities near the fringing coral reefs of Kenting. My previous field research focused on the ecology and physiology of reef-building corals. I was in the field at Palmyra Atoll, Line Islands and in the lab at the Scripps Institution of Oceanography, University of California San Diego. In particular, I focused on the relationship of corals with their "algal symbionts," which nourish them in nutrient-poor oceans.

A fellowship from the National Science Foundation East Asia and Pacific Summer Institutes program and Taiwan's National Science Council offered me the opportunity to perform research at a world-class laboratory while on a coral reef, one of only a handful of such sites in the world.

Although I have been scuba diving all around the world — in Panama, Mexico, the USA, French Polynesia, Fiji, the Line Islands and Japan to name a few — diving in Taiwan is unique. Before every voyage the Coast Guard comes aboard to check your boat and everyone's passport. I was fortunate to work with one of Taiwan's best divemasters, Wei-Chieh.

We recently collected fertilized adult coral colonies and brought them back to the NMMBA, where I maintained them in individual aquaria in either high- or low-light conditions, until they released their larvae about two weeks later. Light intensity is a central component of coral bleaching, one of the greatest threats to coral reefs today. Coral fluorescent proteins, similar to those produced by jellyfish (a discovery for which the Nobel Prize in 2008 was awarded), absorb specific wavelengths (colors) of light and re-emit them in a different color. The function of fluorescent proteins in corals is a hotly debated topic, although most data support a role in photoprotection.

With Dr. Tung-Yung Fan, a world expert on reproduction and larval ecology of brooding corals based at the NMMBA and my host for the summer, and my PhD advisor, Dr. Dimitri Deheyn, we published the findings from my EAPSI research in PLoS ONE.

The research took an abrupt turn when the deadliest typhoon in Taiwan's history, Typhoon Morakot, struck on August 7, 2009. Southern Taiwan was the hardest hit, and we were holed up for three days with the wind and rain ripping the roof tiling off, cracking a roof beam and causing minor flooding in our apartment at the NMMBA. But, we were very fortunate compared to most of our local neighbors who lost power, water and had significant amounts of damage. Overall, Typhoon Morakot brought nearly 10 feet of rain and caused more than $3 billion (in U.S. dollars) in damage in Taiwan. The ocean turned the color of chocolate milk for seven days, a large ship wrecked on the reefs just beside the NMMBA, nearby aquaculture fish ended up in the ocean and countless logs dotted the sea, the result of massive erosion tearing entire mountainsides downstream. The NMMBA had to shut off inflow of seawater to the aquarium, eventually ending my experiments. Fortunately, I was finished with the bulk of data collection.

To escape the typhoon-ravaged mainland, we headed to the island of Lanyu, famed for its unspoiled coral reefs and sea snakes. In genuine Taiwanese fashion, we piled scuba tanks onto scooters and headed off for dives. In the aftermath of the typhoon, we observed giant corals flipped over and blooms of cyanobacteria, but the reefs remained breathtaking and the sea snakes abundant. Lanyu is also home to a fascinating aboriginal culture centered on its most important food resource, flying fish.

After exploring Taiwan's underwater environment, I wanted to experience its rugged terrestrial terrain. Taiwan has more than 150 mountains over 10,000 feet tall! The high alpine meadows, lakes and bamboo forests make the scenery unforgettable. The Taiwanese are, by far, the friendliest and most generous people I have ever met. They would offer us rides, food and help everywhere we went, and parents would encourage their children to practice their English with us. Some of my favorite memories include a make-shift barbecue party with local friends (where the barbeque was made out of an old automobile wheel!), watching a family of six ride a scooter on the trails of Taroko Gorge, learning the monk history of Chung Tai Chan Monastery and hiking trails that go straight up mountainsides — no switchbacks here. I fell in love with the people, culture and natural beauty of Taiwan, where ancient and modern are everywhere side-by-side. I hope to return to discover more of its many hidden gems.

Editor's Note: This research was supported by the National Science Foundation, the federal agency charged with funding basic research and education across all fields of science and engineering. Any opinions, findings, and conclusions or recommendations expressed in this material are those of the author and do not necessarily reflect the views of the National Science Foundation. See the Behind the Scenes Archive.