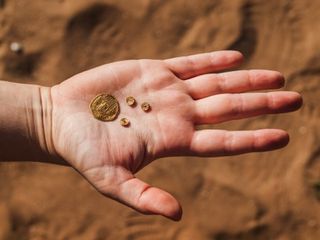 Inside of an ancient garbage pit, archaeologists discovered precious artifacts, including a gold coin and three items inlaid with gold that adorned jewelry.
(Image: © Assaf Peretz, courtesy of the Israel Antiquities Authority)

Hundreds of coins, intact lamps and even ancient gold jewelry have been found in Israel, curiously discarded hundreds of years ago in a Byzantine garbage dump.

Archaeologists have been excavating the agricultural outskirts of the ancient city of Arsuf, also called Apollonia, just north of Tel Aviv. There, they have found evidence of wine presses, olive presses and traces of buildings used by farmers, but perhaps their most intriguing finds have come out of the Byzantine trash pits at the site.

Researchers Oren Tal of Tel Aviv University and Moshe Ajami of the Israel Antiquities Authority (IAA) said one of the garbage heaps was more than 98 feet (30 meters) in diameter and contained fragments of jars, cookware, tableware, glass vessels and animal bones. Along with this trash they also found intact, useable artifacts.

"Among other things, more than four hundred coins were found which are mostly Byzantine, including one gold coin, as well as two hundred whole and intact Samaritan lamps (among them lamps that were never used), rings and gold jewelry," Tal and Ajami said in a statement from the IAA. [See Images of a Byzantine Mosaic]

"Noteworthy among the jewelry is an octagonal ring with parts of verses from the Samaritan Pentateuch engraved in Samaritan script on each of its sides (one side reads: Adonai is his name, another side: One God, and so on)," the researchers added.

Apollonia enjoyed more than 1,500 years of occupation, from the Persian period of the late sixth century B.C. through the end of the Crusader period in the 13th century A.D.

During the late Byzantine period, in the fifth, sixth and seventh centuries, the city was called Sozousa and its occupants included both Christians and Samaritans. Previous excavations have revealed a church, plaster-lined pools dating back to this period. The new excavations, funded by the Israel Lands Administration, are taking place ahead of the expansion the city of Herzliya.