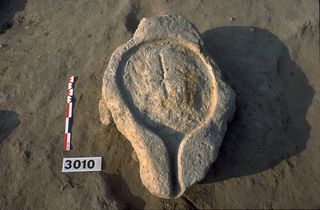 An ancient limestone platform dating back to 425 B.C is the oldest wine press ever discovered on French soil.

The press is the first evidence of winemaking in what is now modern-day France, according to new research published this week in the journal Proceedings of the National Academy of Sciences. The evidence suggests inhabitants of the region of Etruria got the ancient residents of France hooked. (Etruria covered parts of modern-day Tuscany, Latium and Umbria in Italy.)

"Now we know that the ancient Etruscans lured the Gauls into the Mediterranean wine culture by importing wine into southern France," study researcher Patrick McGovern, who directs the Bimolecular Archaeology Laboratory for Cuisine, Fermented Beverages and Health at the University of Pennsylvania Museum, said in a statement. "This built up a demand that could only be met by establishing a native industry." [In Photos: Amazing Ruins of the Ancient World]

The spread of wine

Humans first domesticated the Eurasian grapevine some 9,000 years ago in the Near East, perhaps in what is now Turkey or Iran. Gradually, the intoxicating beverage spread across the Mediterranean Sea, conveyed by Phoenicians and Greeks. By 800 B.C., the Phoenicians were trading wine with the Etruscans, storing it in large jars called amphoras.

Shipwrecks from around 600 B.C. are filled with these Etruscan amphoras, suggesting that residents of the area that is now Italy were by then exporting their own wine. In the coastal town of Lattara, near modern-day Lattes, France, a merchant storage complex full of these amphoras has been found, dating back to the town's heyday of 525 B.C. to 475 B.C.

McGovern and his colleagues analyzed three of these amphoras to find out if they really contained wine. They also analyzed an odd limestone discovery shaped like a rounded platform with a spout, thought to be a press of some sort. Whether the locals used the press to smash olives or grapes was unknown.

The researchers followed careful standards for the artifacts they analyzed: Amphoras had to be excavated undisturbed and sealed, with their bases intact and available for analysis. They also had to be unwashed and had to contain possible residue.

The analysis revealed tartaric acid, which is found naturally in grapes and is a major component of wine. Other wine-related acids — including succinic acid, malic acid and citric acid — were all present.

This ancient wine may not have had much in common with what might be found on a tasting trip to Napa or Sonoma, Calif., today. The researchers also found traces of pine resin, likely used for flavor and as a preservative. And the wine contained compounds from herbs, likely rosemary, basil and thyme.

Today, one Greek wine called retsina still uses pine resin for flavor, even though glass bottles have removed the need for it as a preservative.

"It's hard for a palate accustomed to Cabernet and Chardonnay to get accustomed to a wine that tastes like, well, turpentine," according to wineloverspage.com, which also describes retsina wine as "neither subtle nor delicate."

The beginnings of French wine

Of course, ancient wines weren't just for recreational quaffing; they were also used as medicinal mixtures, McGovern said. More importantly, the limestone press contained traces of tartaric acid, revealing that the residents of Lattara not only imported wine, but also made it. The press was in use by about 425 B.C. to 400 B.C., making it the first known evidence of winemaking in what is now France.

The older amphoras, combined with the ancient press, suggest that residents of the area that is now southern France first imported wine and then started cultivation, probably with vines imported from Etruria. Shipwrecks from that region have been found with vine seedlings inside, according to the researchers.

"France's rise to world prominence in the wine culture has been well documented, especially since the 12th century, when the Cistercian monks determined by trial-and-error that Chardonnay and Pinot Noir were the best cultivars to grow in Burgundy," McGovern said. "What we haven't had is clear chemical evidence, combined with botanical and archaeological data, showing how wine was introduced into France and initiated a native industry."