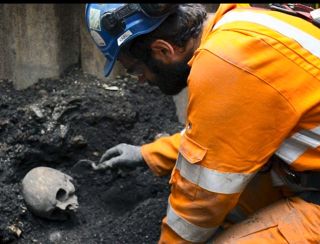 A worker at the Crossrail tunneling site uncovers the skull of a former resident of Bedlam, Europe's oldest insane asylum.
(Image: © YouTube screengrab)

In one of London's most crowded areas, just a few feet beneath the surface, the buried remains of the residents from Europe's oldest insane asylum have recently been unearthed.

During the Middle Ages, Bethlem Hospital (often known by its popular nickname, "Bedlam") was located near the current site of the busy Liverpool Street train station. Bedlam was so notorious for its treatment of the mentally ill that the word "bedlam" eventually became synonymous with chaos or mayhem.

And beneath that archaeological treasure trove, the remains of an ancient Roman road that once linked London to York and Lincoln was also discovered. The earth around the roadway is littered with Roman-era horseshoes. [8 Grisly Archaeological Discoveries]

And beneath that, archaeologists have uncovered the remains of a Mesolithic tool-making site where prehistoric Londoners fashioned rocks into flint tools about 9,000 years ago, the BBC reports.

All these important archaeological digs are coming to light as the result of the Crossrail project, a subway line that will connect West London to areas farther east.

Bedlam was located in the area of the Crossrail tunneling site from 1247 to 1676, after which it was relocated to a larger building nearby. The asylum's burial grounds are believed to have many thousands of bodies buried in it.

"This is one of the densest burial grounds we have excavated in London," Nicholas Elsden of the Museum of London told the Huffington Post. The crowded conditions at the site are a result of the Black Plague, which killed up to 3 million people in England alone.

"It's an overflow burial ground — when the parish churches just couldn't cope in the city, and so they bought a piece of land from Bedlam Hospital just behind us and set out this new burial ground," Elsden said. "They just kept putting more and more people in. It was absolutely chock-a-block."

In addition to the archaeological gains made by studying thousands of human remains, Roman artifacts and Mesolithic tools, the site has yielded a few glittering treasures, too, including gold coins and jewelry from the 16th century.

"Everyone's been running around in Liverpool Street for years and not thinking that they've been walking around on bodies from one of the densest burial grounds in London," Elsden told the Daily Mail.

"This site is a rare, perhaps unprecedented opportunity," Elsden added. "This is a major roadway outside one of London's busiest railway stations. You don't get to dig that up normally."