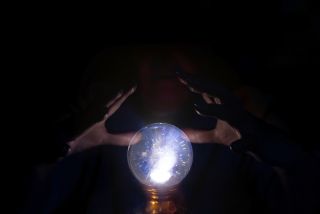 The belief that the future can be foretold may help people to feel more in control of their lives, a new study finds.
(Image: © Crystall ball photo via Shutterstock)

Predicting the future may be impossible, but that doesn't stop many people from believing that some have the power to do so.

In fact, a new study finds people are more prone to believe in prognostication when they feel their lives are out of their own control, suggesting that faith in paranormal forecasting provides a kind of coping mechanism for humans.

"It can be unpleasant to think that we aren't really in control of our lives, and people go to great lengths psychologically to "trick" themselves into feeling more in control," said study researcher Katharine Greenway, a psychologist at the University of Queensland in Australia. "One way they can do this is by enhancing the feeling that the future is predictable, so that they know what is going to happen."

One in four Americans believes that precognitive abilities exist, and thousands of dollars are spent on psychics every year, despite any scientific proof that our futures can be predicted, according to the study.

Greenway said the new study stemmed from wanting to test her theory that a sense of control is vital to why many people cling to the myth that the future is knowable.

In the study, the researchers divided the 85 college undergraduate student participants into two groups. One group wrote a description about a time they felt in control (the high-control group), and another group wrote about a time they felt out of control (the low-control group). Then, each group answered questions about their beliefs in the paranormal. [Top 10 Most Famous Ghosts]

The results showed that those in the low-control group showed stronger beliefs in future foretelling.

The findings suggest that not only do people turn to superstitious beliefs as a coping technique when feeling out of control, but also that this belief also helps them to feel that they're once again in charge of their fate, the researchers said.

Interestingly, people only put faith in foresight when they felt out of control. When the researchers told a high-control group that precognition was real, the participants didn't report feeling any more control over their lives.

"These findings point towards the malleability of the human psychological system," Greenway said. "If we feel as though we lack control, we perform 'psychological gymnastics' to help us feel in control once more. This all happens largely outside conscious awareness. We are a biased and sometimes irrational species, but adaptively so."

Other experts had mixed views on the findings.

Bastiaan Rutjens, a psychologist at the University of Amsterdam, said, "This is one of the first studies that shows that such 'compensation' for lack of control actually helps, and as such has functional value."

The results show that when people feel that life is out of control, they "basically just go out of their way to restore the notion that the world is orderly and under control," Rutjens said.

However, Kristin Laurin, who studies organizational behavior at Stanford University, questioned the finding. "For precognition to give me that added control, I need to be the one who has precognition — it doesn't necessarily help me that there may be other people who can predict the future," she said.

Laurinalso said that if a person were to know in advance what was going to happen to them, they could actually feel that they have no control over the event. "If it's possible, for example, to predict accurately at what age I will die, or what kind of person I will marry, then nothing I can do will change that," she said.

Jennifer Whitson, a psychologistat the University of Texas at Austin, disagreed. "It seems that we like there to be some control in the world, but it doesn't necessarily have to be us," that can foresee our own futures, Whitson said.