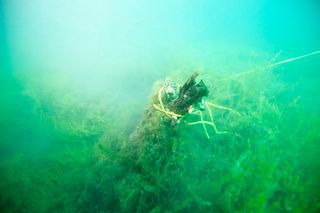 Burrowing animals such as shipworms and zebra mussels can destroy wood underwater, making dating impossible. Here, underwater trees in the Great Lakes may not be subject to shipworms, zebra mussels are slowly eating through the wood.
(Image: © Captain Luke Clyburn)

If salvage companies get their way, an underwater forest of 50,000-year-old trees only recently discovered could be destroyed to make high-end coffee tables.

The primeval underwater forest, long buried under the sediments at the bottom of the Gulf of Mexico, was probably uncovered by Hurricane Katrina and discovered by scuba divers. After it made headlines around the world, several salvage companies have contacted one of those divers to get the forest's location, which has not been publicly shared.

The companies' aim? Pull up the trees for the valuable wood.

"You have to think of the cachet of something made from a 50,000-year-old wood," said Ben Raines, the diver who first reported on the site and the executive director of the Weeks Bay Foundation, a waterways conservation organization. "It's like having a fossil on your shelf."

Now Raines' organization is scrambling to make the area a marine reserve before fortune hunters and scrap companies turn the forest into a fleeting memory. In their plan, scuba divers and fishermen could explore the site — as long as they left the majestic trees intact.

The grove of 50,000-year-old bald cypress trees was preserved beneath ocean sediments off the coast of Alabama until Hurricane Katrina swept those sediments away.

The trees were in such pristine condition that fresh sap oozed from the stumps when they were cut. The enchanted forest became a natural reef, teeming with fish and crustaceans that sheltered between tree roots.

After LiveScience's OurAmazingPlanet originally reported the story, people from around the country contacted Raines to discover the forest's location — including several salvage companies hoping to mine the forest for its wood.

Raines worried that it was just a matter of time before the salvage companies discovered the site on their own and destroyed the forest. Without any protection, there was nothing stopping them, he said.

To stop that from happening, Raines' foundation is campaigning to turn the forest into a marine reserve. In their plan, scuba divers and fishermen would be free to explore the site as long as they left the forest intact, but salvage companies and treasure hunters would be barred from stripping the site. Similar laws protect shipwrecks from being mined for loot. [Shipwrecks Gallery: Secrets of the Deep]

The foundation has contacted several federal agencies, including the Bureau of Ocean Management, to begin that process.

The foundation is also raising money from the public to do more thorough research and exploration.

Though Raines has briefly explored an area about three football fields big, the total forest could be nearly a half square mile (1.23 square kilometers) in area. Scientists believe the grove of thousand-year-old trees could reveal millennia of the Gulf of Mexico's climate history.

The foundation has also approached the Smithsonian Museum of Natural History in Washington, D.C., the Estuarium on Dauphin Island, Ala., and the Aquarium of the Americas in New Orleans to come up with ways to allow the public to see pieces of the forest.

Scientists initially worried that the forest could rot or be eaten away by sea life in the next few years. But Raines believes it's worth protecting the underwater treasure because it may be around much longer than that.

"It's been out there eight years that we know of, and the stumps are not rotting that quickly," he told LiveScience's OurAmazingPlanet.

The outer portion of the trees could indeed be around for a while for divers to enjoy, said Steven Leavitt, a dendrochronologist (someone who studies tree rings) at the University of Arizona, who is not involved in studying the forest.

But on piers, shipworms typically eat enough wood underwater to make them structurally unstable within a year, he said.

Burrowing animals such as shipworms and zebra mussels can destroy wood underwater, making dating impossible. Here, underwater trees in the Great Lakes may not be subject to shipworms, zebra mussels are slowly eating through the wood. "The outside is in pretty good shape, but the inside is sort of like Swiss cheese," Leavitt told LiveScience.

That can make climate analysis and dating from tree rings impossible after several years, he said.

Still, the fact that the forest has been around at least eight years and scientists have already dated some of the wood is a good sign, he added.

"That suggests that maybe the consumption of the wood is going to be much slower than it might be otherwise and therefore maybe they have a little bit more time," Leavitt said.

In addition, sonar mapping revealed that the vast majority of the forest is still buried under the sediment, and could be uncovered by the next big hurricane, Raines said.

"It could just as easily become bigger over time," Raines said.

But another big storm could just as easily bury the forest once again, Leavitt said.

The primeval forest is one of the country's great national treasures, Raines added.

"This ranks right up there with the Grand Canyon or Yellowstone; it's just amazing when you lay eyes on it," he said. "I don’t think I could stand it if what ended up happening is all the wood got mined out of the bottom and got turned into furniture."