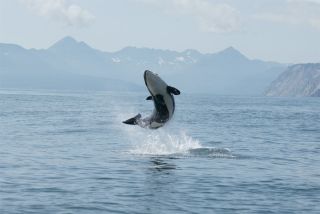 Before getting into the science and the controversy, I'll make a prediction: "Blackfish" — the documentary that takes a critical look at SeaWorld's killer whales and premiered recently at Lincoln Center in New York — will win the Academy Award for best documentary. It's that good, and precisely the type of film that wins that award each year.

For those who go to see "Blackfish", which one prominent film critic has called the scariest movie of the year, be prepared. While it has calm neuroscientists and marine biologists talking about what science has taught us about orcas in captivity, it also has several intense, graphic and gut-wrenching depictions of incidents captured on video of killer whales attacking trainers.

For instance, one of the most captivating sequences of the film shows an orca grabbing a highly skilled trainer's foot, carrying him to the bottom of the pool for more than a minute, and then surfacing. The trainer heroically tries to calm the killer whale on the surface, but the orca repeatedly plunges to the bottom of the pool. Finally, after several deep plunges, the orca lets the trainer go.

At its heart, "Blackfish" chronicles why SeaWorld, a large, publicly traded corporation that makes billions of dollars off the killer whales at the center of its amusement park system may have covered-up or lied about threats posed by orcas in captivity — both to the trainers who literally risk life and limb, as well as to the killer whales themselves.

The film also goes to great lengths to illustrate why SeaWorld may have deceived the public about the true nature of what happened in the tragic death of one of its most highly skilled orca trainers, Dawn Brancheau, in 2010. SeaWorld has said publicly that the trainer made mistakes when she was killed by the SeaWorld orca, Tilikum. "Blackfish" says otherwise.

SeaWorld maintains that Brancheau got too close and allowed the killer whale to pull her in by her ponytail. Former trainers in the film claim that this isn't possible because Tilikum had been "desensed" to ponytails. A case brought by the federal Occupational Health and Safety Administration now bans in-pool interactions — known as "water works" — between trainers and killer whales.

John Hargrove, an ex-SeaWorld trainer who is featured in the film and was at the Lincoln Center premiere, told me he's disappointed SeaWorld continues to blame trainers for mistakes in such "water works" accidents. He also hopes that the film director's decision to shift focus midstream in the making of the documentary (to chronicle what may have really happened to Dawn Brancheau) will lead to reforms in both trainer interactions and the way orcas are treated in captivity.

"The director, Gabriela Cowperthwaite, started off with one movie in mind. It was more of a philosophical piece about the relationships between man and an apex predator," said Hargrove, who left SeaWorld before shooting for "Blackfish" began. "And then when she started to find out these things that had been covered up and SeaWorld had not been entirely truthful about [Brancheau's death]…she just felt like, 'I have this information and I have a responsibility now to put this film out.' She's said in interviews that she ended up going in a totally different direction [than originally intended]."

As Hargrove noted, Orcas are apex predators, like grizzly bears , gray wolves or African lions. They're nearly mythological creatures who hunt other large creatures of the sea (like dolphins, sea lions or even other whales) in groups. Marine biologists have learned in the recent decades that orcas may also be quite evolved, with a highly sensitized sense of family and community.

Marine biologists and others studying orcas in both captivity and the wild, for instance, have learned that orca communities and families are vastly different in various parts of the world. Even their DNA is different, depending on what part of the world they inhabit.

In fact, one of the surprising aspects of "Blackfish" — beyond its horrifying depictions of the potential dangers of interacting too closely with orcas in captivity — is its explanation of what happened when SeaWorld separated young calves from their mothers. In one instance, after SeaWorld removed a young calf to another amusement park, its mother grieved for days, emitting high-pitched, wailing sounds that trainers hadn't heard in the 30 years this female orca had been in captivity.

Now, to the controversy. When "Blackfish" debuted at the Sundance Festival, SeaWorld initially ignored the documentary, hoping it would fade quietly. No more. Now that "Blackfish" is going national, SeaWorld has gone on the offensive. A few days before its debut at Lincoln Center and nationwide, SeaWorld issued a scathing, point-by-point rebuttal to the film's premise in an effort to blunt criticism.

"'Blackfish' is billed as a documentary, but instead of a fair and balanced treatment of a complex subject, the film is inaccurate and misleading and, regrettably, exploits a tragedy that remains a source of deep pain for Dawn Brancheau's family, friends and colleagues," SeaWorld said in its statement, which was first reported by Variety in Hollywood. The SeaWorld statement was sent to 50 film critics.

"To promote its bias that killer whales should not be maintained in a zoological setting, the film paints a distorted picture that withholds from viewers key facts about SeaWorld — among them, that SeaWorld is one of the world's most respected zoological institutions , that SeaWorld rescues, rehabilitates and returns to the wild hundreds of wild animals every year, and that SeaWorld commits millions of dollars annually to conservation and scientific research," it said.

"Perhaps most important, the film fails to mention SeaWorld's commitment to the safety of its team members and guests and to the care and welfare of its animals, as demonstrated by the company's continual refinement and improvement to its killer whale facilities, equipment and procedures both before and after the death of Dawn Brancheau."

"I think SeaWorld is just looking to sow a seed of doubt because they have to." she said. "There were so many things I didn't include because they took us away from Tilikum, but they were very disturbing and could have easily loaded the film and turned it into a piece of activism — which was never my intent," she told Canada.com. "I never started out thinking I wanted to shut SeaWorld down. I'm not an activist. I am a storyteller."

Cowperthwaite, a mom who took her kids to SeaWorld to see the killer whales, also told ABC News: "There is no documented case of a killer whale ever killing anybody in the wild. It's only in captivity where these incidents have happened." The film's producer, Magnolia Pictures, has likewise issued its own point-by-point rebuttal to the SeaWorld statement in defense of the film.

So stay tuned. Meanwhile, go see "Blackfish" and decide for yourself.

This article first appeared as Why 'Blackfish' May Be the Best Documentary of the Year in the column At the Edge by Jeff Nesbiton U.S. News & World Report. His most recent Op-Ed was How Much Liberty Must We Trade for Security?. The views expressed are those of the author and do not necessarily reflect the views of the publisher.