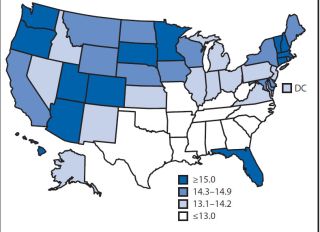 A map of the United States showing healthy life expectancy - how many years a person can be expected to live in good health - by state.
(Image: © CDC: MMWR)

Older adults living in the southern United States have fewer healthy years of life ahead of them than those living in other parts of the U.S., according to a new report from the Centers for Disease Control and Prevention (CDC).

The lowest-ranking state was Mississippi, where 65-year-olds can expect to spend 61.5 percent of their remaining life in good health. They have an average of 10.8 healthy years ahead of them, out of an average of 17.5 years total of expected life ahead of them.

The highest-ranking state was Vermont, where 65-year-olds will spend 78.2 percent of their remaining years in good health, with 17.5 healthy years ahead of them, out of 19.4 total remaining years.

Total life expectancy was highest in Hawaii, where adults live an average of 21.3 more years after they turn 65 (and 16.2 of those years expected to be healthy).

"Although [healthy life expectancy] measures do not identify the reasons for poor health or shorter lives, they provide a snapshot of the health status of a population," the researchers wrote in the July 19 issue of the CDC's Morbidity and Mortality Weekly Report.

Many factors influence people's health as they age, including such healthy behaviors as exercise, not smoking, receiving medical services such as vaccines and cancer screenings, and having access to quality health care, the report said.

"The results presented in this study can be used as a baseline for states to monitor the [healthy life expectancy] of persons aged 65 years as they age, identify health disparities among subpopulations and target resources to improve population health," the report said.

The study was based on survey and census information gathered between 2007 and 2009.