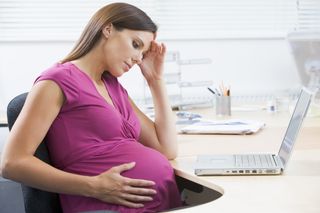 High levels of anxiety during pregnancy can be harmful to the baby. Eating oily fish once a week may help, study suggests.
(Image: © Pregnancy photo via Shutterstock)

Eating at least some fish during pregnancy may lower women's risk of anxiety, a new study suggests.

In the study, women who never or rarely ate dark or oily fish (such as tuna and salmon) were 53 percent more likely to have high levels of anxiety in their third trimester of pregnancy, compared with women who ate fish at least once a week.

The researchers also found that among vegetarian women, those who had the strictest diets were 25 percent more likely to have anxiety, compared with women who followed more flexible vegetarian diets and occasionally consumed fish or meat.

The link between higher fish consumption and lower risk for anxiety may be due to the omega-3 fatty acids in fish, the researchers said, writing in their study published July 12 in the journal PLOS ONE.

While stress is not uncommon in pregnant women, studies have linked high levels of anxiety to babies being born prematurely or with low weight.

"In order to have a healthy pregnancy, women need to follow a healthy diet, and not something special for pregnancy," said study author Juliana Vaz, a researcher at the Federal University of Pelotas in Brazil. A healthy diet can include whole grains, vegetables, meat, poultry and fish, she said.

Some fish and seafood are good sources of omega-3 fatty acids, which are among the nutrients that cannot be made by the body, and must be obtained from diet.

Scientists have been studying the role of omega-3 in the body and how it affects different organs, including the heart and brain.

"We continue to see consistent data from many studies, suggesting that omega-3s have an impact on a range of behavioral disorders such as depression, anxiety, or schizophrenia," said Dr. Ski Chilton, professor of physiology and pharmacology at Wake Forest School of Medicine, who was not involved in the study.

Because of the demands of a growing fetus, pregnant women need higher amounts of nutrients. The lack of fish and meat in a vegetarian diet may explain why vegetarian women in the study tended to experience more anxiety, the researchers said.

"In this study, the vegetarian group did not fare well at all. The fetus's brain is growing dramatically, and the fetus is getting all the omega-3s that are being produced," Chilton said.

The study involved more than 9,500 women, who the researchers grouped based on their dietary patterns. One group was labeled the "health-conscious" group, and included women who mainly ate fruits, salad, fish and cereals. The "traditional" group's diet consisted mainly of vegetables, red meat and chicken. Other groups were vegetarians, women who ate large amounts of processed food, and women who had a diet rich in sweets.

At the 32 weeks of pregnancy, the women completed questionnaires, and those who scored in the top 15 percent were classified as having high levels of anxiety.

It's not exactly clear how low omega-3s in diet may result in anxiety, but it could be that low omega-3s in the blood may disrupt communication between cells, and affect how the body responds to psychological stress, the researchers said. [5 Ways Your Cells Deal With Stress]

While low dietary omega-3s may exacerbate anxiety outside of pregnancy as well, as suggested by previous research, the effects may be more pronounced during pregnancy. Because of the nutritional demands of the fetus, a pregnant woman may experience a more severe omega-3 deficiency, Chilton said.

Pregnant women should avoid eating fish that contains high levels of mercury, such as tilefish, swordfish, king mackerel and shark. It is safe to eat up to 12 ounces a week (the equivalent of two average meals) of a variety of fish lower in mercury, such as salmon, pollock, catfish and canned light tuna, according to the U.S. Food and Drug Administration and the Environmental Protection Agency.