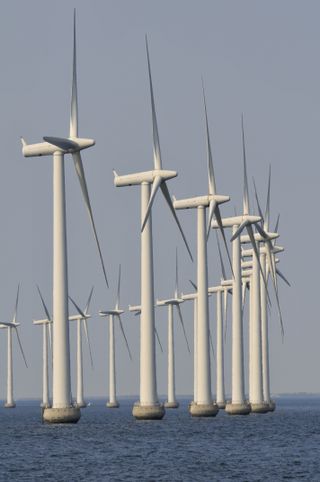 These wind turbines are generating electricity offshore, though not in the United States, which has only one offshore turbine in operation.
(Image: © Carlos Minguell/Oceana)

Matt Huelsenbeck is a marine scientist for the climate and energy campaign at Oceana. This article was adapted from one that first appeared on The Beacon. Huelsenbeck contributed this article to LiveScience's Expert Voices: Op-Ed & Insights.

In light of rising gas prices, increased dependence on foreign oil, ocean acidification and global climate change, it's clear the United States needs to look for alternative and cleaner sources of energy. Offshore wind energy is one such source that, although in early developmental stages in the United States, could offer hope for a future of energy independence and a clean energy economy.

Thankfully, there is some good news on the horizon.

The first U.S. offshore wind turbine was recently deployed off the coast of Maine. This pilot project uses a floating platform with a small wind turbine attached to a tower, marking a small, but significant step toward the development of an abundant, clean-energy resource in the United States.

One of the reasons offshore wind energy is so effective is that these winds are stronger and steadier than onshore winds. And offshore winds are strongest during the day as well as in heat waves, when the demand for energy is highest. In fact, the East Coast of the United States has been dubbed the "Saudi Arabia" of offshore wind, since there is enough wind energy off this coast to provide the entire country with electricity — if the industry is fully developed. [For Wind Turbines, Bigger Equals Greener]

Unfortunately, the United States still lags behind Europe in developing offshore wind farms; in Europe, such infrastructure has been providing jobs and clean energy since 1991. Although the United States has a lot of catching up to do, the country's floating offshore wind technology is an encouraging step forward. The development of floating turbines is exciting, because some of the strongest offshore winds can be found over deep-water locations. Conventional offshore wind turbines, which use a steel foundation placed into the seabed, cannot access these sites. Floating offshore wind platforms, however, could be placed in deep-water areas near Maine, California, Oregon, Hawaii and within the Great Lakes.

Another big milestone for offshore wind happened in June, when the Bureau of Ocean Energy Management (BOEM) announced that the nation's first competitive lease sales for offshore wind development would be scheduled for July, in an area of ocean off of Rhode Island and Massachusetts. The effort could provide one million homes with emissions-free electricity.

The technology is here, and the demand for clean energy is high, but we will need political support to truly establish an offshore wind industry in the United States. To that end, Oceana has been working to create a long-term extension to the Investment Tax Credit (ITC) for offshore wind, which would allow offshore wind to flourish, and help the country transition away from fossil fuels and harmful offshore drilling. Unlike offshore oil drilling, offshore wind is clean and will never spill. If the United States truly wants energy independence, the country must get serious about developing the untapped wealth of clean, renewable wind energy off its shores.

This article originally appeared as "A Historic Time for Offshore Wind"on the Oceana blog The Beacon. The views expressed are those of the author and do not necessarily reflect the views of the publisher. This article was originally published on LiveScience.com.