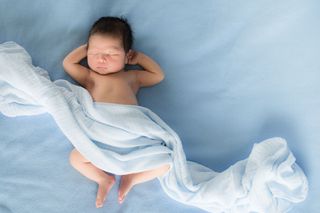 The world is eagerly awaiting the birth of the royal baby, but considering this is Kate Middleton's first pregnancy, is the baby likely to be late?

Buckingham Palace has not provided an official due date for the baby but has said the newborn is expected in mid-July.

Babies don't always arrive when they're supposed to, and mothers often say firstborns tend to be late, although this conclusion is typically based on anecdotal reports. [See 11 Big Fat Pregnancy Myths].

Recently, Allen Downey, a professor of computer science at Franklin W. Olin College of Engineering in Needham, Mass., did an analysis to find out if there was any truth to this old wives' tale. Downey studied a 2002 Centers for Disease Control and Prevention survey of 7,643 women, who reported 9,148 live births.

He found that first babies were, indeed, slightly more likely to be born late, at 41 weeks or later, compared with other babies (second-borns, third-borns, etc.)

The results showed that a firstborn baby has a 15 to 16 percent chance of being born late, compared with a 9 or 10 percent chance for other babies. Most babies were born at 39 weeks of pregnancy.

However, the study also found that firstborns were also more likely to be born early, at 37 weeks or earlier.

So, in general, firstborns were less likely to be born on time, said Downey, who is the author of "Think Stats" (O'Reilly Media, 2011). It's possible that first babies may be less likely to be on time because the date of conception is not accurate, Downey said.

Dr. Jill Rabin, chief of ambulatory care, obstetrics and gynecology at Long Island Jewish Medical Center in New Hyde Park, N.Y., noted that a baby's due date is an estimate, and it's normal for babies to arrive two weeks before or after that day. Therefore, although parents may perceive a baby to be "late" if it arrives two weeks after the due date, this is not really the case.

"When you're expecting a first baby...you're locked on to the due date, and you expect the baby on that due date," Rabin said. But even if a woman thinks she knows exactly when she conceived, "it still can be two weeks high or low, and it's considered normal," she added.

Rabin said there is no known biological reason why firstborn babies would be more likely to be early or late.

After 42 weeks of pregnancy, a baby is considered overdue, Rabin said, and doctors become concerned about complications, such as an aging placenta that is not able to deliver proper nutrition to the baby.

According to the Mayo Clinic, a woman may be more likely to have an overdue baby if the baby is male. Will the royal heir be a boy?