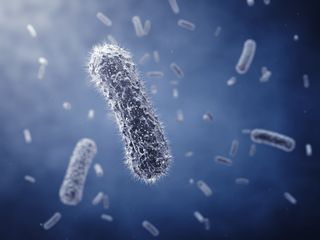 One species of bacteria seems to get many of the perks of sexual reproduction without actually having sex, a new study finds.

"I call it preproduction, because it happens before the reproduction," said study co-author Todd Gray, a geneticist at the New York State Department of Health Wadsworth Center, in Albany, N.Y. "It's positioning yourself to be better at reproduction than your siblings or your parent strain."

The findings, published today (July 9) in the journal PLOS Biology, raise the possibility that disease-causing bacteria can evolve even faster than previously thought. [6 Superbugs to Watch Out For]

For the most part, bacteria reproduce asexually, with individual bacterium splitting in two to create genetically identical clones.

"It's very efficient, because anybody can procreate just by doing cell division," Gray told LiveScience.

But that means the bacteria lack the genetic diversity to adapt to changing environmental conditions.

"If conditions change, they have all their eggs in one basket," Gray said.

Past studies of the bacteria E. coli revealed the microbes underwent a process known as horizontal gene transfer, in which one bacterium receives a bit of DNA from another bacterium before forming clones of itself. But that process involves donating a single segment of DNA that didn't appear throughout the genome.

Gray and his colleagues came across an obscure 1970s report on DNA transfer in mycobacteria and were intrigued.

The team decided to look for this DNA transfer in M. smegmatis, which scientists use to study tuberculosis in the lab. They soon noticed something funny going on.

The bacterium seemed to have a totally novel way of reproducing. One bacterium would transfer a complex, random assortment of DNA snippets to a recipient bacterium. The recipient would incorporate those pieces throughout its genome and then reproduce asexually, creating new bacteria with different genomes than either of the parental strains. The process creates similar genetic diversity to that produced via sexual reproduction.

Many other bacteria likely reproduce in this way as well, Gray said.

The new findings suggest that bacteria may be able to evolve faster than previously thought, he said.

"Overnight mating could produce millions of different bacterium" that are as individual as snowflakes, Gray said.

That ability to evolve overnight could have dangerous consequences, as disease-causing strains of bacteria could emerge from harmless ones very quickly. For instance, drug-resistant tuberculosis is on the rise, and the researchers are planning to see whether this gene-swapping process could transfer drug-resistance between strains.