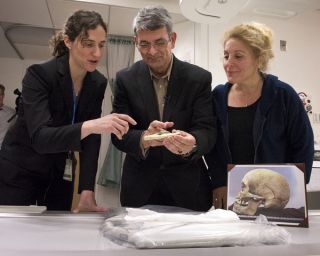 Dr. Helise Coopersmith is a musculoskeletal and body imaging radiologist for the North Shore-LIJ Health System, assistant professor of radiology at the Hofstra North Shore-LIJ School of Medicine and a member of the Hofstra medical school's admissions committee. She contributed this article to LiveScience's Expert Voices: Op-Ed & Insights.

I have worked as a musculoskeletal radiologist for many years and have seen a wide range of bone injuries. But recently, I found myself for the first time using my X-ray table to look at a 2,500-year-old bone and a piece of an ancient arrow.

The bone, discovered in Northern Greece, was brought to me by Anagnostis Agelarakis, a professor and chair of anthropology at Adelphi University. It was a section of the ulna bone, which is the inner of two forearm bones.

My initial impression was surprise. Although the outer region of bone, the cortex, was thinned by time, and the inner region, the medullary cavity, had long since disintegrated, the girth and contours of the bone were quite similar to a human bone one would see today. [Images: Ancient Mural Tomb Discovered in China ]

But, most notably, there was a turquoise-colored object jutting out from the bone, and according to Agelarakis, this was one of four sides of a bronze arrowhead. He proposed that this piece of the arrowhead was never removed by the field surgeons of the time because a barbed component anchoring it into the bone would have damaged the superficial soft tissues if removal were attempted.

Beside my X-ray table, I had a photograph of the re-assembled skull that was found with the ulna bone and a sketch by scientific illustrator Argie Agelarakis (Anagnostis's wife) of what the soldier's face may have looked like around the time of his eventual death, presumably at about 58 to 62 years of age.

My team and I took three X-rays of the ulna bone, and we found that indeed the films confirmed what Anagnostis Agelarakis had suspected.

We also noted that the arrowhead and the osseous spur were in the region of the flexor digitorum profundus muscle, which means the injury would have made it difficult for the soldier to flex his fingers and grasp objects.

There was a story behind the objects we were seeing, the story of an ancient Greek warrior who was an injured veteran, like many who are celebrated today and served by the hospital I work in.

It is amazing to think that the same X-ray technology that we use to diagnose conditions for our patients can answer age-old questions and help solve historical mysteries.