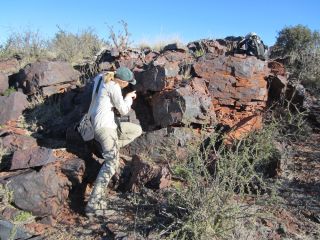 The game changer for life on Earth was photosynthesis. Now scientists think they've found a molecular stepping-stone for this complicated chemical process, which flooded the atmosphere with oxygen about 2.4 billion years ago.

Tiny single-celled organisms called cyanobacteria were the first life on Earth to master photosynthesis. They use light from the sun to split water molecules, releasing oxygen as waste. Many researchers suspect the oxidation of the element manganese by earlier life-forms was the first step in developing this molecular machinery — the metal still plays a critical role in photosynthesis today.

At its most basic, the process of oxidation removes electrons from atoms. In this case, the early microbes stole electrons from manganese, replacing them with oxygen taken from carbon dioxide. The result is manganese oxide, similar to iron rust or copper's green patina.

"If this happened, we would be able to see manganese [oxide] being concentrated in rocks before the rise of oxygen," said Woody Fischer, a geobiologist at Caltech in Pasadena, Calif., and study co-author.

Fischer and his colleagues searched for manganese-rich rocks deposited just before the Great Oxidation Event, when photosynthesis began and Earth's atmosphere flooded with oxygen. (Genetic studies that look at the evolution of proteins and enzymes in photosynthesizing microbes also match this timing.)

In 2.415-billion-year-old rocks from South Africa, the researchers found their smoking gun — rich deposits of oxidized manganese. The ancient rock is evidence that microbes were harnessing the sun for energy and converting it to food with manganese, according to a study published June 24 in the journal Proceedings of the National Academy of Sciences.

Chemical analysis of the rock, part of an ancient ocean basin, also reveals no atmospheric oxygen was available, so the water-splitting cyanobacteria had yet to evolve. (However, oxygen was present in molecules of water and carbon dioxide, for example.)

The cyanobacteria may have adopted or improved on the manganese process for photosynthesis, the researchers think. "The manganese is the magic machinery that splits water molecules," Fischer said.

The team now plans to try to reverse-engineer modern cyanobacteria to perform manganese-oxidizing photosynthesis, and look at rocks of the same age on other continents to back up their finding.

"Manganese plays an essential role in modern biological water-splitting as a necessary catalyst in the process, so manganese-oxidizing photosynthesis makes sense as a potential transitional photosystem," Jena Johnson, a graduate student at Caltech and lead author of the study, said in a statement.