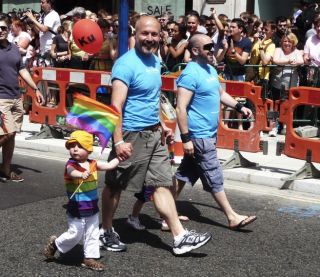 Two Supreme Court rulings on same-sex marriage announced today (June 26) were hailed as landmark victories for the gay rights movement, and will significantly change the recognition of legal rights for many gay couples and their children.

Earlier today, in a 5-4 ruling, the Supreme Court struck down the Defense of Marriage Act, which prohibited lawfully married same-sex couples from accessing the federal benefits afforded to opposite-sex couples and their families. Now all marriages legally performed by states will be recognized by the federal government.

The Court also dismissed a case on Proposition 8, California's ban on same-sex marriage, which is likely to pave the way for "The Golden State" to become the 13th state to recognize same-sex unions. But while the Supreme Court's decision reversed California's ban, the rulings do not overturn laws banning same-sex marriage in other states. [Infographic: States Where Gay Marriage Is Legal]

In the aftermath of today's DOMA rulings, here are six ways the lives of gay couples could be affected:

In 1996, Congress passed the Defense of Marriage Act (DOMA), which prevented the federal government from recognizing same-sex marriages that were deemed legal by individual states. With regards to federal benefits, the law defined "marriage" as being between a man and woman.

The case challenging DOMA, U.S. v. Windsor, involved New York residents Edith Windsor and Thea Spyer, who legally married in Toronto, Canada in 2007. After Spyer died in 2009, the Internal Revenue Service was not allowed to recognize Windsor as a surviving spouse eligible to inherit Spyer's property. As a result, Windsor was required to pay more than $360,000 in federal estate taxes, which do not apply for marriages between a man and a woman.

With DOMA struck down, couples in states where same-sex unions are legal will now have access to a range of federal benefits relating to health care. Married same-sex couples will be able to receive employee health coverage more easily, and be eligible for medical leave and health benefits under COBRA. Previously, when a gay spouse received health care benefits through his or her partner's employer, the value of that coverage was taxed as federal income (this was not the case for straight married couples). These extra charges should go away on married gay couples' federal tax returns now.

Military benefits will be made available to all military spouses following the Supreme Court's ruling, according to officials at the Department of Defense. Previously, the DOMA law had prevented federal agencies from offering the same benefits to same-sex spouses afforded to opposite-sex military spouses. [8 Supreme Court Rulings That Changed US Families]

"Every person who serves our nation in uniform stepped forward with courage and commitment," Hagel added. "All that matters is their patriotism, their willingness to serve their country and their qualifications to do so. Today's ruling helps ensure that all men and women who serve this country can be treated fairly and equally, with the full dignity and respect they so richly deserve."

Same-sex spouses who are American citizens will now be able to sponsor their non-citizen spouses for U.S. visas, and can qualify for immigration measures toward citizenship. Under DOMA, only marriages between a man and a woman were recognized by the U.S. Citizenship and Immigration Services. Already, because of the Supreme Court ruling, a New York City immigration judge has halted deportation proceedings for a Colombian man who is legally married to a male U.S. citizen, Think Progress reported.

The Supreme Court's landmark ruling also affords social security survivor benefits to legally married same-sex couples. This means that in the event of death, gay people will be eligible to receive their deceased spouses' Social Security checks, if they amount to more than the ones currently being collected.

With the repeal of DOMA, married same-sex couples in states that legally recognize the unions will be able to jointly file state and federal tax returns. In states where same-sex marriage is not recognized, however, individuals may be able to file joint federal tax returns, but will still have to submit single tax forms to the state.