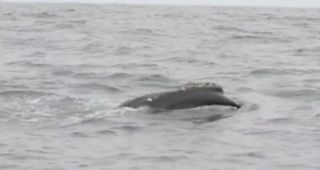 An endangered North Pacific right whale off the coast of British Columbia, spotted there for the first time in 61 years. There are only about 500 of these whales left.
(Image: © DFO Cetacean Research Program)

A whale biologist has spotted and filmed an endangered North Pacific right whale (Eubalaena japonica) off the coast of British Columbia for the first time in 61 years, according to a report. The whale is one of the world's rarest, with an estimated global population of about 500 and only 50 in the eastern Pacific.

Researcher John Ford has kept an eye out for them his whole life but had given up hope of seeing one of the animals, he told The Province, a news website based in Vancouver. "We would never have imagined that we would actually find one," he said.

The animals were heavily hunted in the 1800s, and were called "right whales" because they were the "right" whales to hunt: They are enormous (weighting up to 70 tons (63,500 kilograms)), slow and they also float after being killed. They were desired for their oil and baleen, the filtering material in their mouths used for catching small animals, which were made into corsets and other products.