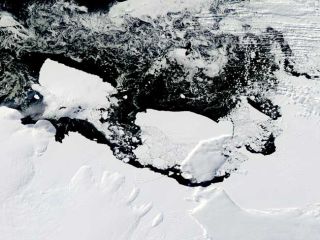 Startling video and pictures of massive, intact pieces of ice breaking off from the continent of Antarctica — a process known as "calving" — are some of the most iconic, vivid images in our minds. The ice shelves that break off to become icebergs have fostered a general belief that the loss of mass on Antarctic ice shelves is mostly due to this calving process.

New research, though, says that huge losses of ice in Antarctica are due to something else — warm water beneath the ice shelves.

The first comprehensive survey of all Antarctic ice shelves by researchers at NASA and other academic institutions found that it is actually a warmer ocean — and not icebergs — that is responsible for the loss of ice-shelf mass that other ongoing research is documenting.

The research team combined data from a variety of sources — including satellite surveillance, airplane readings and reconstructed models of ice accumulation — to put together the first-ever survey of the entire continent and compare it to what is already known about ice-sheet melting rates.

The team of researchers studied how a warmer ocean melts the undersides of ice shelves across Antarctica — a process called basal melt — and found that this is actually responsible for most of the observed ice-shelf mass loss.

While research teams have studied isolated rates of melting underneath individual ice shelves in the past, this is the first time that any research team has looked at all of the continent's ice shelves at once.

The researchers found the melting underneath all of the ice shelves accounted for 55 percent of all ice-shelf mass loss between 2003 and 2008, which is significantly higher than what anyone had previously thought.

"The traditional view on Antarctic mass loss is it is almost entirely controlled by iceberg calving ," said Eric Rignot, who is with NASA's Jet Propulsion Laboratory and is the lead author of a study to be published in the June 14 issue of Science magazine. "Our study shows melting from below by the ocean waters is larger, and this should change our perspective on the evolution of the ice sheet in a warming climate."

The comprehensive survey also found that melting beneath ice shelves is quite uneven around Antarctica. The three giant ice shelves that make up two-thirds of the total area of the continent — the Ross, Filchner and Ronne shelves,  the ones that always attract a great deal of media attention when pieces calve into the sea — actually account for just 15 percent of basal melting, the study found.

The study team also compared the rates of ice loss on the shelves to the speed at which the entire continent itself is losing mass and found that the ice shelves at the perimeter of Antarctica are losing mass twice as fast as the Antarctic ice sheet as a whole.

"Ice-shelf melt doesn't necessarily mean an ice shelf is decaying; it can be compensated by the ice flow from the continent," Rignot said. "But in a number of places around Antarctica, ice shelves are melting too fast, and a consequence of that is glaciers, and the entire continent, are changing as well."

While there has been a great deal of attention paid to the rapidly deteriorating sea-ice loss during summer months at the top of the world, in the Arctic Ocean, and what impact this could have on sea-level rise in the coming decades, most of the world’s fresh water is actually trapped as ice in Antarctica. About 60 percent of Earth’s fresh water is locked up in one, gigantic ice sheet there.

It's the ice shelves, though, that determine how much of the ice locked in that ice returns to the oceans — and one of the principal reasons that research teams have been studying things like basal melt so closely. Knowing the reasons — and the rate — of the mass-loss of ice shelves at the perimeter of Antarctica will help scientists understand how fast the continent is melting.

Understanding how ice shelves melt underneath, and at what speed, will also improve supercomputer simulations that rely on global ocean circulation models by providing an accurate assessment of how much ice-shelf melting is actually occurring in and around the continent. This is important to understand because melting ice from beneath ice shelves has a greater impact on ocean circulation than shelves that simply break off, or calve.

"Changes in basal melting are helping to change the properties of Antarctic bottom water, which is one component of the ocean's overturning circulation," said another study author, Stan Jacobs, an oceanographer at Columbia University's Lamont-Doherty Earth Observatory. "In some areas it also impacts ecosystems by driving coastal upwelling, which brings up micronutrients like iron that fuel persistent plankton blooms in the summer."

While the total picture is complicated — basal melting is greater in some places, and iceberg calving is greater in others — the study team estimated that the Antarctic ice shelves in total lost almost 3,000 trillion pounds of ice each year during the timeframe they studied due to basal melting, and about 2,400 trillion pounds due to iceberg formation.

This article first appeared as Warm Oceans Major Cause of Ice Loss in Antarctica in the column At the Edge by Jeff Nesbit on U.S. News & World Report.