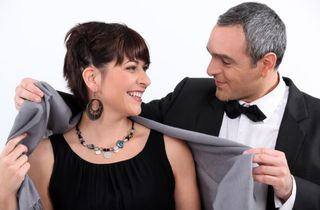 Through history, older men have, on average, tended to partner with younger women, which may have led to the evolution of menopause, new research suggests.
(Image: © auremar | Shutterstock.com)

Ladies, here's one more thing you can blame on men: menopause. At least, that's according to a new theory.

Women go through menopause because men have consistently preferred younger women in recent evolutionary history, according to a study published today (June 13) in the journal PLOS Computational Biology.Thus, menopause is not evolutionarily advantageous and may be the result of a series of random, harmful mutations that accumulated in women but weren't acted on by evolution because the women had already reproduced by the time the mutations affected them.

"Our first assumption is that mating in humans is not random with respect to age, which means men of all ages prefer to mate with younger women," said study co-author Rama Singh, an evolutionary biologist at McMaster University in Canada. "If mating is with younger women, any deleterious mutations which affect women's reproduction later in life will accumulate because they are not being acted on by natural selection."

Menopause, in which women stop menstruating and become infertile, has been a long-standing puzzle for biologists: Why would evolution have led to a trait that essentially reduces the reproductive potential of an animal?

Most other animals don't go through menopause (although killer whales do). Even chimpanzees, humans' closest living relatives, seem to reproduce into old age in the wild, and males even prefer older females.

Biologists have proposed the grandmother hypothesis to explain the conundrum. The hypothesis holds that menopause allows a grandmother who is done rearing her own kids to help rear the young of her children, thereby increasing the survival odds of her grandkids, and therefore, her genes.

But grandchildren and grandparents share just a quarter of their genes, versus half for children and their parents, so menopause would have to dramatically boost survival of grandchildren to be evolutionarily advantageous. Past studies have shown that maternal grandmothers boost their grandkids' survival rates, though exactly how much depends on the society.

For thousands of years (at least), men have, on average, mated with younger women, Singh said.

That's because, if all else is equal, "those who reproduce earlier, their genes are passed on faster," Singh told LiveScience.

So the researchers created a computer simulation to model that preference.

Early on, both men and women in the model reproduced until death. But over time, the model found, men's preference for youth reduced older women's odds of reproducing.

Simultaneously, people accumulated random mutations, some of which decreased later-life reproductive ability. But since older women were left out in the cold anyways, those mutations didn't impact their reproductive success, whereas mutations in men that could reduce late-life reproduction were weeded out. (Men who stopped reproducing at some point in life would produce fewer offspring than those who didn't, and the late reproducers would outcompete those who stopped breeding earlier.)

Over 50,000 to 100,000 years, the accumulation of all those mutations could have led to universal menopause, the researchers suggest. Menopause would then be another form of aging akin to graying hair or wrinkles.

If later childbearing becomes the norm, as current societal trends suggest, women who can reproduce at older ages might gain an evolutionary advantage, and menopause could, in theory be pushed later, Singh said.But it's more plausible that technological changes such as fertility treatments will artificially extend women's ability to reproduce, Singh said.

But the new model might have the causation reversed, wrote Kristen Hawkes, an anthropologist at the University of Utah, who was not involved in the study, in an email to LiveScience.

As human life spans increased, women might have had many healthy years after fertility. As a result, men grew to prefer younger women because older women couldn't reproduce.

Supporting that hypothesis, female chimpanzees see their egg reserves decline around the same age as human females, Hawkes noted. But unlike humans, they die shortly after this age, whereas humans have decades of healthy life left.

"The preference men have for young partners is a striking contrast with other primates," Hawkes said. "My guess about that has been it's a consequence of our life history."