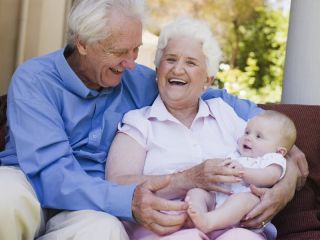 Do you like living past the age of 20 or so? Thank Grandma.

A new simulation suggests the rise of grandmothering explains why human life spans are so much longer than those of chimpanzees and other non-human apes. By taking a theoretical society with apelike life spans and adding grandmas, researchers were able to double everyone's length of life.

The findings, reported today (Oct. 23) in the journal Proceedings of the Royal Society B, support the grandmother hypothesis. This hypothesis aims to explain why human females, unlike other primates and mammals, outlive their reproductive years. Perhaps, the idea goes, grandmothers took on the duty of caring for their grandchildren, allowing their own children to have more offspring. Families where people lived long enough to grandmother thus would have had a genetic advantage, allowing longevity to spread through natural selection.

Study researcher Kristen Hawkes, an anthropologist at the University of Utah, became interested in this hypothesis while observing the Hadza, a group of hunter-gatherers in Tanzania. In this society, Hawkes told LiveScience, post-menopausal women work hard.

"The enormous economic productivity of these amazing older women was something that just gobsmacked us," she said.

In particular, older Hadza women dig large, stubbornly rooted tubers from rocky soil, a task too difficult for young children, Hawkes said. Statistically, she and her colleagues found that children's health and success were linked to their mothers' work — until mom had a new baby. After that, kids' health was linked with how hard their grandmothers worked.

Hawkes is not the only researcher to find a benefit to having grandma around. A 2008 review of research published in the journal Evolution and Human Behavior found that maternal grandmothers improve a child's likelihood of survival. And even today, parents with close emotional ties to their children can expect a greater likelihood of grandchildren, according to a 2011 study published in the Proceedings of the Royal Society B.

But no one had ever shown that grandmothering could have caused the evolutionary leap from an apelike life span to a human one, Hawkes said. Human and non-human great ape females generally lose their fertility at the same time, around age 45, she said. But chimps, gorillas and other non-human apes usually die before their fertility declines entirely. Human women, on the other hand, remain strong and productive well after menopause. [7 Ways the Mind & Body Change with Age]

To test the grandmother hypothesis' role in promoting longevity, Hawkes and her colleagues started out with a mathematical model representing a community of 1,000 males and females with apelike life spans averaging in the low 20s. The model had the ability to "evolve" longer or shorter life spans depending on conditions.

The researchers defined grandmothers as females over the age of 45 without dependents of their own, capable of caring for any child in the population. When these women were added to the mix, the researchers found, life spans skyrocketed. Within 24,000 to 60,000 years, depending on the parameters used, the average person in the simulation was living to his or her late 40s instead of early 20s.

The researchers suspect that changing climate and ecology during early human history made it more difficult for newly weaned children to forage for their own food while their moms focused on new offspring. In this situation, grandmothers — like the tuber-digging Hadza — would have been crucial for providing food to older siblings.

By caring for weaned children, Hawkes said, grandmas could take pressure off moms, allowing them to shorten the time between pregnancies and thus have more offspring. With more genes being passed on, natural selection would have favored longer lives.

"Allowing mothers to have that next baby before the previous one is independent seems like it's the center of this story," Hawkes said.