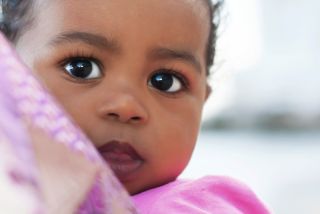 Babies may be able to show sympathy before their first birthday, according to a new study in which 10-month-olds preferred the victims rather than the aggressors in a bullying encounter.

The research, published Wednesday (June 12) in the journal PLOS ONE, is the first to find evidence of possible sympathy in children younger than toddlers, the researchers said. Sympathy is the feeling of concern for others.

Because 10-month-olds can't yet express sympathy verbally, Kyoto University researcher Shoji Itakura and colleagues turned to a common tactic in baby-brain research: using simple animations to determine what infants prefer. They showed 40 babies an animation of a blue ball and a yellow cube.

Half of the infants watched a short clip in which the blue ball chased the yellow cube around the screen, hitting it seven times before finally squishing it against a wall. The other half of the group saw the same movements, including the squishing, but the two shapes moved independently without interacting.

In some cases, the "bully" and "victim" roles were swapped, so that the yellow cube was the bad guy. After watching the show, the babies were shown a real yellow cube and a real blue ball, and given the chance to reach for one of the objects.

In cases where the babies had seen one shape beating up on the other, they overwhelmingly reached for the victim, 16 out of 20 times. In comparison, when the shapes hadn't interacted, the babies' choices were basically random — nine went for the shape that had gotten squished, and the other 11 went for the nonsquished shape.

The results could have simply indicated that babies preferred to steer clear of a nasty character, not that they felt sympathy for the bullied one. To rule out that possibility, the researchers conducted a second experiment with 24 babies, also 10 months old. These babies saw a show nearly identical to the first, except there was a third character: a red cylinder. The red cylinder was a neutral presence on-screen, neither bullying nor being bullied.

In other words, even when there was no mean character present that a baby might want to avoid, the babies still picked the victim.

It goes too far to call this proof of sympathy, said Kiley Hamlin, an infant cognition researcher at the University of British Columbia who was not involved in the study. Nevertheless, Hamlin told LiveScience, the findings are "a great first step" in establishing the development of sympathy.

Previously, Hamlin has reported that babies as young as 8 months old prefer to see wrongdoers punished rather than treated nicely.

Some researchers have raised concerns about the kinds of animations used in infant cognition studies, arguing that babies might be marking their preferences based on extraneous information, like whether one character bounces or moves differently than the others.

Itakura and colleagues aimed to control for those concerns by making sure their character shapes moved with the same speed and consistency.

"They did a great job controlling for things like movement and amount of color on the stage," Hamlin said.

Though more studies will be needed to nail down babies' motivations for preferring victims of aggression, Hamlin said anecdotes suggest that even young babies notice others in distress, and seem bothered by that distress.

"This is a nice way of saying, 'Okay, this is a far more abstract situation, is this something that 10-month-olds are noticing and responding to?" Hamlin said. "It seems to be that case that they are."