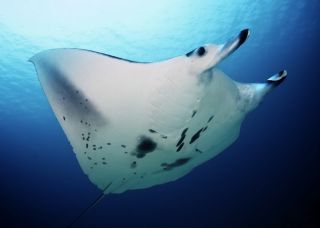 Protecting manta rays makes monetary sense, new research shows. Worldwide, manta rays drive $140 million (U.S. dollars) in tourism-related revenues, according to a study published last week in the journal PLOS ONE. The animals are a big draw for snorkelers and divers in areas like the Maldives, where tourists are willing to pay more to see rays than sharks or turtles.

This study suggests the animals are worth more left alive in the ocean than in the market place, where they are desired for their meat and gill rakes (cartilaginous structures that protect the gills), used in Chinese medicine. The authors calculate a single ray in an area of Micronesia brings in $1.9 million over its lifetime in tourism revenue, whereas rays in a Sri Lanka market cost about $41 each. A more conservative estimate from the Maldives puts the long-term value of individual rays at $100,000 each from tourism.

Due to their worldwide decline, manta rays were recently listed under CITES (the Convention on International Trade in Endangered Species of Wild Fauna and Flora), which increased protections for the animals. Sharks were also listed, and sharks are also worth more alive than dead, another study found.