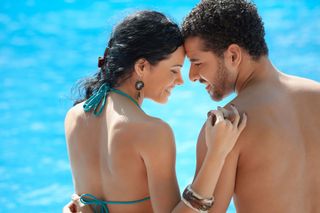 One secret to younger-looking skin may be as simple as remembering to slather on sunscreen every day, a new study suggests.

Australian researchers found that people who applied a daily dollop of sunscreen had fewer wrinkles on their skin than those who didn't use sunscreen regularly.

Sunscreen not only shielded skin from ultraviolet rays, it also protected skin from some visible signs of getting older. In fact, the study revealed that adults up to age 55 who put on sunscreen more frequently had 24 percent less skin aging compared with men and women who used it only occasionally.

Regular sunscreen use by young and middle-aged adults under age 55 brings a cosmetic benefit by preventing progressive skin aging as well as decreasing their risk of skin cancer in the long-term, said study author Dr. Adele Green, a specialist in public health medicine and senior scientist at the Queensland Institute of Medical Research in Brisbane, Australia.

"Our findings now provide evidence that regular sunscreen use slows down skin aging in healthy middle-aged men and women," Green explained. Dermatologists had suspected this to be true, but prior to the findings they didn't have the science to back up their suspicions.

The findings were published online today (June 3) in the journal Annals of Internal Medicine, and they were funded in part by Ross Cosmetics, asunscreen manufacturer.

In the study, researchers looked at more than 900 Australian adults ages 25 to 55. Half the participants were told to apply sunscreen with a sun-protection factor (SPF) of 15 or greater to their head, neck, arms, and hands every morning, while the other participants were instructed to use sunscreen whenever they wanted to.

At the beginning of the study, the researchers graded, on a six-point scale, the amount of aging seen on the back of one hand of all participants, and then they regraded the hands again 4.5 years later.

This link held even after researchers considered other factors that could influence the skin's appearance, such as a person's smoking and sun exposure history, skin color, and the use of other sun-protection methods, such as wearing a hat.

Researchers also considered whether people who took beta-carotene, an antioxidant-rich dietary supplement, might have fewer wrinkles and sun damage compared with those who took a placebo. But the supplement had no effect on skin aging.

Although the study did not look at people over 55, Green said she suspects they benefit from using sunscreen to prevent skin's progressive aging changes, yet she acknowledged a lack of firm evidence for it.

"We know that it does decrease their risk of skin cancer, however," she said.

Dr. Elizabeth L. Tanzi, a dermatologist and co-director of the Washington Institute of Dermatologic Laser Surgery in Washington, D.C., said, "It's a well-done study that proves what we as dermatologists have seen in our offices for years — the proper application of sunscreen can slow the signs of skin aging."

Tanzi said she was not surprised that people taking beta-carotene supplements didn't reap any noticeable benefits from them. They're not something she recommends to her patients to protect skin from looking older.

One of the limitations of the study is that it followed participants for only 4.5 years, Tanzi said. Had the study been longer, she believes it would find similar results, with a sustained slowing of the signs of aging.

Although Tanzi admits the skin aging process can never be stopped completely, she said sunscreen goes a long way to help slow it down.

"You can call sunscreen one of the only true 'anti-aging' ingredients on the market today," Tanzi said.