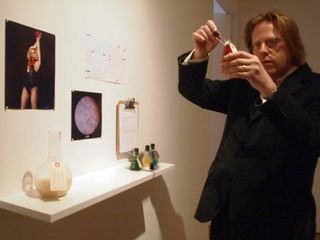 The second coming of Jesus Christ may be on the horizon — along with the third, fourth and fifth incarnations, depending on how quickly an artist's new "cloning tincture" catches on.

Conceptual artist Jonathon Keats is giving everyone the chance to become the Christian messiah — and a number of other historical personages and celebrities as well — through his Epigenetic Cloning Agency, which opens a new branch at a Berlin gallery today (May 31).

To be clear: The Epigenetic Cloning Agency is an art project whose concoctions are meant to inspire thought and conversation about the nature of identity and the march of scientific progress, not actually turn you into someone else. In fact, the potions aren't even meant for human consumption.

Keats is dedicating the Berlin office tonight with a reception that will serve a cocktail specially designed to create clones of himself. This drink is much cruder than his fine-tuned tinctures, Keats said, but he thinks it will serve his purposes well. [How Stem Cell Cloning Works (Infographic)]

"It seemed that having a cocktail, a drink that anybody could make at home — that would be a much more efficient way to go about making myself legion," Keats told LiveScience.

Scientists have cloned organisms before, generally by injecting the nucleus of a donor cell into an egg whose own DNA has been removed. Dolly the sheepwas famously cloned using this method in 1996.

But epigenetic cloningtakes a different tack, seeking to alter how a customer's genes are expressed rather than swapping out his or her entire genome. The technique draws its inspiration from the big and burgeoning field of epigenetics, which is revealing the importance of environmental factors in shaping who we turn out to be.

For example, the recipe for becoming Jesus Christ includes, among other things, some basic components of the Mediterranean diet of the time and substantial doses of omega-3 fatty acids (he likely ate a lot of fish), Keats told LiveScience back in October at the opening of the San Francisco branch of the Epigenetic Cloning Agency.

The concoction also sports a healthy dose of iron, because "there were nails involved," Keats said.

"Probably the most important ingredient of all, though, is placebo," he added. "The amount of faith that he seems to have had was vast."

The Epigenetic Cloning Agency's Berlin branch will be offering several other tinctures in addition to the Jesus mixture, including Napoleon Bonaparte, Queen Elizabeth I, Lady Gaga, swimmer Michael Phelps and Angela Merkel, the current chancellor of Germany. All of these bottles will sell for 15 Euros (about $20 at current exchange rates). [Trippy Tales: The History of 8 Hallucinogens]

Keats consulted European gossip magazines to get an idea of what Merkel likes to eat. He said he devised a potion containing lots of starch, sodium and cholesterol, among other ingredients, after learning of the chancellor's fondness for minced pork sausage and a meaty, sour soup called solyanka.

The list of Berlin offerings is just a starting point, Keats said. The Epigenetic Cloning Agency is willing to tailor tinctures to their customers' desires, and it will even take a stab at fictional characters such as Sherlock Holmes if asked to do so.

"In a sense, I guess, you would be a more realistic version of that character," Keats said. "As a living person, you would be able to live that life more fully than Arthur Conan Doyle could ever have imagined," said Keats, referring to the author of the Sherlock Holmes novels.

Epigenetic effects are felt most profoundly in the early stages of an organism's development, so adults shouldn't expect a sudden and dramatic transformation into Napoleon, Jesus or anyone else, Keats told LiveScience in San Francisco

"This is going to work a lot better when you're younger," he said. "In utero is the best time to approach me."

The Epigenetic Cloning Agency's activities are intended to raise some of the ethical and philosophical questions that would apply if humanity ever does develop the technology to clone individual humans, dead or alive.

For instance, what motivates people who want to become a Merkel clone? Is imitation the sincerest form of flattery, as the saying goes? Or do these folks seek to replace her or absorb her strength and power, as warriors once tried to do by eating the hearts of their fallen foes?

The cloning of Christ is a particularly tricky area, of course. With many Jesuses running around, which one — if any — would believers follow? Could any of these messiahs be legitimate, or would they need the genealogical bona fides that the original Jesus boasted?

"All of these questions about how you relate to these iconic figures — who they are and what makes them who they are, what made them who they were — all of those questions, I think, are available for discussion by way of the cloning agency," Keats said. "And by allowing people to partake of it — to really become the epigenetic clone of Christ rather than simply talking about it around a table — I think that it raises the stakes."

The Epigenetic Cloning Agency will be open for business at the Team Titanic gallery in Berlin through June 8.